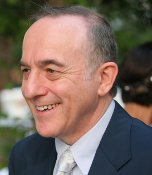 Having been an active fundraiser for Israel in London, and volunteering in Israel following the Six Day War, Baruch Tanaman came to live in Israel in 1978 with his wife and three small children. With his background in business studies he was welcomed into the finance management world of the Israeli hi-tech sector working first with Digital, then Compaq and finally HP. Baruch also served in the IDF in a field intelligence unit. During his leisure time, Baruch developed his acting skills with the Sharon Players, TACT, and in various TV adverts and promotional films. Since his retirement he has appeared in two Israeli feature films. Currently living in Raanana, Baruch has become an active volunteer with  ESRA Finance and Executive Committees, and also served as Chairman for four years (2016 – 2019). He is enjoying his children and ten grandchildren.