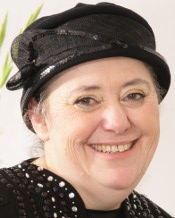 Hannah Baum came on aliya to Kibbutz Yizreel from Habonim, Melbourne, Australia in 1972. She studied life sciences and education at Monash University in Melbourne and worked as a research assistant for the Australian Council of Educational Research as well as teaching. In Israel she spent six years on the kibbutz working in the kindergarten, kitchen, dining room and electronics start-up. On leaving the kibbutz, Hannah, and her late husband Harris, settled in Netanya where she has been ever since. Hannah worked as the secretary to the Managing Director of an insurance company, office manager for an arms dealer and in production design at Scitex. When her son was born she stayed home to raise their two children, becoming

involved in the parents committee at school. Since Harris passed away in 2007, Hannah has returned to her first loves, biology and education, becoming involved in an Israeli start-up marketing a health food supplement.