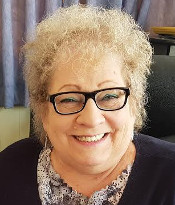 Judy (Brodie) Copeland was born in London, went to school at the French Lycee as her parents wanted her to be bilingual. After studying French and Russian at London University, Judy came to live in Israel in 1966. After the 6-Day War, she settled in Arad where Copey (Michael Copeland), Dr. Justin Phillips and she founded the WUJS (World Union of Jewish Students) Institute. Judy and Copey married in Arad in 1968 and lived there for 33 years, with a 3-year break when Copey was an emissary in the UK. Judy volunteered in many spheres in Arad: the Culture Department of the Community Center where she initiated and ran a concert subscription series and organized many events. She received volunteer awards from the Community Center Company; Mishmar Ezrahi (Home Guard); and Yad Sarah. Judy also sang in choirs, managed one of them for a while, founded two singing groups and led four choir trips overseas. She worked with Ethiopian immigrants from Operation Solomon opening a club for the adults, teaching them Israeli folk-dancing, helping reunite families who had been separated, as well as staging a fundraising event for them. After her retirement from the Institute, she opened a translation and typing agency. In 2000 she moved to Herzliya and worked for Noble Energy, the US company which found natural gas offshore Israel, setting up their offices in Israel. Since 2007 she has worked for ESRA running its Raanana center.