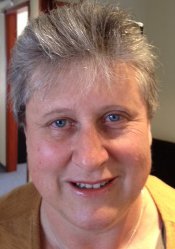 Liz Trakeniski graduated Birmingham University school of education in 1976 and has a background of more than thirty five years of community work in England and Israel.  Following her coming to livein Israel in 1981 Liz worked on Project Renewal representing overseas communities (United Kingdom and Australia) as well as coordinating social rehabilitation programs in Jaffa. In 1986 Liz established the first independently run community center in the country, Rosh Pituach in Herzliya.

Her activities have included representing Israel abroad as an emissary and she is a board member and volunteer on two nonprofit organizations. Following several years as a volunteer in ESRA, she joined the staff in 1993 later becoming the executive director. ​Recently having left her position as​ Director of Community Investments at Matan - Investing in the Community​, Liz is now a consultant for NGOs and has also  entered the world of real estate in Israel.​

She is mother to Benji & Sharon, finds time, albeit limited, for film, study and watching tennis.