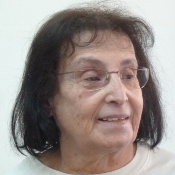 Lolita Marcos was born in Elisabethville, Belgian Congo. She attended a convent school there until the Congo got its independence in 1960 at which time she moved with her parents to South Africa. At first they lived in Somerset West, a village in the country. Lolita finished her schooling in Stellenbosch. When she went to Cape Town University, her father who did not want her to live in the university hostel, moved the whole family to Cape Town, near the university.

Lolita’s dream was to work with children and she started a degree in psychology. After one year, she realized it would be several years before she would get near a child.  So she took a course for kindergarten and sub A&B taught at Barkley House College.  It had three schools attached to it and students started working with the kids from the word go.  After graduating from Barkley House, she got a job in a French school in Spain.  She loved it there but missed being among Jews.

In 1971 she came to live in Israel and bought an apartment in Herzliya where her parents had come to live. When ESRA started in 1979 Lolita became involved being responsible for planning a trip each month.  Says Lolita: “Not only did I get to know the country better but I also met lots of local residents.  It gave me a feeling of belonging”.  She worked at the American School for 24 years and since she retired she spends her time volunteering for various organizations. “It gives me something to do and also enormous satisfaction.”