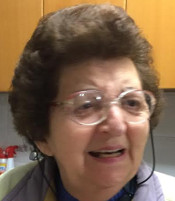 Marion Lupu (nee Young) was born in Bath, Somerset, England in March 1940 - a "war baby". On leaving school, she studied shorthand, typing and bookkeeping at Kilburn Polytechnic in North West London.  Then to Manchester University for a B.A. in English, French and Spanish.

Marion came to Israel with IUJF - Inter-University Jewish Federation for a travel-and-study summer before returning to England for a post- graduate degree in education at Cambridge. In 1963 Marion came to live in Israel. She went to Beersheva to learn Hebrew at the ulpan before starting to teach Technical English at the Technion.  She moved in 1965 to the University of Haifa where she taught English and studied for an M.A.  This lasted until she was age 68 when she retired officially in 2008. However, she was retained by the University as a proofreader and editor for members of the staff who needed their books and articles to be checked and polished before submitting them to journals and publishers of academic books, including Oxford University Press.

Marion is in constant contact with the housemother/s at the Shelter for Battered Women and their children to find out what they need - clothing for the women and children, bedding, items of kitchen ware, toys for the kindergarten there.  She then publicizes the list of their needs and take any donated items to the shelter