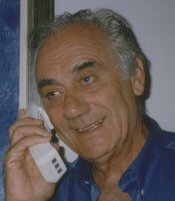 Paul Kohn was born in Baden-bei-Wien, Austria (17.11.1930). At the time of the Anschluss in March 1938 when Nazi Germany occupied Austria, he and his parents reached Bratislava.

From there he was one of 10 boys who got onto a Kindertransport train, organized by the legendary Sir Nicholas Winton. He reached England in June 1939.  When World War II broke out Paul was evacuated to Chatteris in Cambridgeshire where he spent the war years in the care of a Baptist minister. In 1945 he returned to London to continue his education at the Davenant Foundation School in Whitechapel. Meanwhile his parents escaped from Europe and set up home

in Haifa where Paul rejoined them in 1949 after a 10 year separation.

Paul served in the Israel Defense Forces until 1954. Upon his release he joined The Jerusalem Post as a reporter in Tel Aviv and feature writer. Later, he became the paper’s Military Correspondent and Tel Aviv stringer for the Associated Press. He was also  a correspondent for the London  Jewish Observer. For the AP he reported on the 1967 and Yom Kippur wars and co-authored the AP’s book on the Six Day War - Lightning Out of Israel.

In 1969 Paul started a 3-year stint as a Jewish Agency emissary in London, dealing with aliya. After returning to Israel he lived in Herzliya where he went into the real estate business whilst continuing also as a sports writer with The Jerusalem Post. He married the late Hannah Moschytz in Zurich in 1960 with whom he had two sons and two daughters all of whom are married, living in Israel, and between them have 11 offsprings. Paul paased away in 2014.