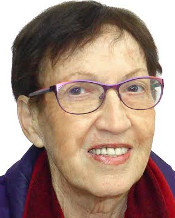 Richelle Shem-Tov was born and grew up in Polokwane (Pietersburg), South Africa. She qualified as a Physiotherapist at Witwatersrand University in Johannesburg. In 1962 she came to live in Israel at the age of 22 and went to an ulpan on Kibbutz Maagan Michael.

She later worked in a number of hospitals and clinics, but for the most part, at the Sharon Hospital, Petah Tikva where she worked as a physiotherapist for 24 years, and as head of the department for the last 10 years, until her retirement in the year 2000. She also did volunteer work with the physiotherapy organization and issues connected with her profession.

She is a mother of four and grandmother of ten and lives with her husband, Sabih in Kiryat Ono, Israel since 1964.