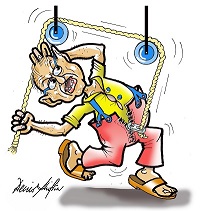 Bubbegum (n.)Candy one’s mother gives to her grandchildren that she never gave to her own children.

Chutzpapa (n.)A father who wakes his wife at 4am so she can change the baby’s diaper.

Deja Nu (n.) having the feeling you’ve seen the same exasperated look on your mother’s face, but not knowing exactly when.

Dis-kvellified (v.) To drop out of law school, med. school or business school as seen through the eyes of parents, grandparents and Uncle Sid. In extreme cases, simply choosing to major in art history when Irv’s son David is majoring in biology is sufficient grounds for dis-kvellification.

Disoriyenta (n.) When Aunt Linda gets lost in a department store and strikes up a conversation with everyone she passes.

Hebort (v.) To forget all the hebrew one ever learned immediately after one’s Bar or Bat Mitzvah.

Impasta (n.) A Jew who starts eating leavened foods before the end of Passover.

Jewbilation (n.) Pride in finding out that one’s favorite celebrity is Jewish or that your offspring is marrying a Jewish person.

Jewdo (n.) A traditional form of selfdefense based on talking one’s way out of a tight spot.

Kinders Shlep (v.) To transport other kids besides yours in your car.

Mamatzah Balls (n.) Matzo balls that are as good as your mother used to make.

Matzilation (v.) Smashing a piece of matzo to bits while trying to butter it.

Meinstein – slang.  My son, the genius!

Minyastics (n.) Going to incredible lengths and troubles to find a tenth person to complete a Minyan.

Mishpochadots (n.) The assorted lipstick and make-up stains found on one’s face and collar after kissing all one’s aunts and cousins at a reception.

Re-shtetlement (n.) Moving from Brooklyn to Miami and finding all your old neighbors live in the same condo building as you.

Schmuckluck (n.) Finding out one’s wife became pregnant after one had a vasectomy. Shofarsogut (n.) The relief you feel when, after many attempts, the shofar is finally blown at the end of Yom Kippur.

Torahfied (n.) Inability to remember one’s lines when called to read from the Torah at one’s Bar or Bat Mitzvah. (OR from the hagadah at Passover).

Trayffic Accident (n.) An appetizer one finds out contains pork.

Yidentify (v.) To be able to determine Jewish origins of celebrities, even though their names might be St. John, Curtis, Davis or Taylor.

Deft definitions that should be in the dictionary

Adult: A person who has stopped growing at both ends and is now growing in the middle.

Beauty Parlor: A place where women curl up and dye.

Committee: A body that keeps minutes and wastes hours.

Dust: Mud with all the juice squeezed out of it.

Egotist: Someone who is usually me-deep in conversation.

Inflation: Cutting money in half without damaging the paper.

Mosquito: An insect that makes you like flies better.

Raisin: A grape with a sunburn.

Secret: Something you tell to one person at a time.

Skeleton: A bunch of bones with the person scraped off.

Toothache: The pain that drives you to extraction.

Tomorrow: One of the greatest labor saving devices of today.

Wrinkles: Something other people have, similar to my character lines.
Tweet
print Email article to a friend
Rate this article