Winning Was The Icing on The Cake 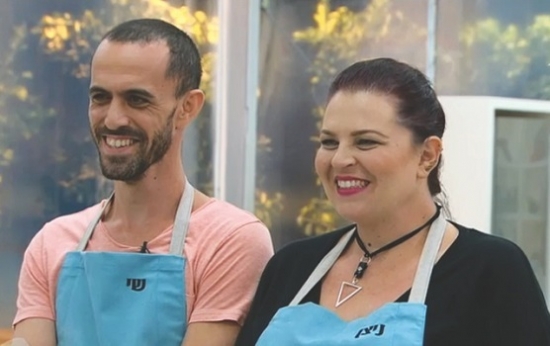 Competitive edge ... Nitzan and Shy in Bake Off Israel

Here she talks about the pleasures – and also the pressures – of being contestants on the prime time twice-a week show. And of being declared the winners . . .

Nitzan Krivine says she has baked all her life. She remembers when she was just nine years old making cookies in the kitchen with her grandmother. “I’m the one who always brought something sweet to an exam or to a party. But that’s it. I never sold a cake in my life, never took a class or saw a professional pastry chef at work.”

So imagine Nitzan’s surprise when she and her  best friend, Shy Golan, were amongst14 couples out of 1,000  hopefuls chosen to take part in the new Channel 2 prime-time TV contest, Bake Off Israel, earlier this year. 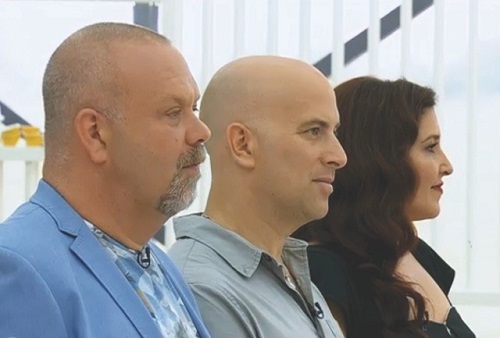 Imagine their amazement when, a few weeks later, they were declared the winners!

And this is where ESRAmagazine has to proudly declare an interest.

For Nitzan is the designer of our display ads which feature in each glossy issue. You’ll find her name in the ‘credits’ on page 2, and her work is dotted all around this and previous issues in display ads.So you can understand how proud we are here at ESRAmagazine of both her and Shy’s success.

Nitzan, 35, and Shy, 36, have known each other for nine years, ever since they met at university where they studied graphic design together. 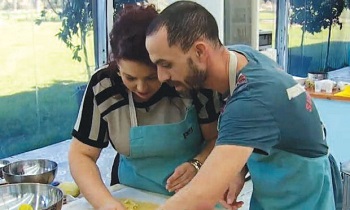 Right: Nitzan and Shy busy creating another amazing cake. Alongside: The wedding cake they created with the two upside down bridegrooms

Today, Shy has his own studio and also teaches. Says Nitzan: “He’s one of the most talented and kind people I know.”

It was Shy who convinced Nitzan that they should enter for the competition, which is based on a successful series running on BBC TV in the UK, and which took the country by storm, clocking up millions of viewers week after week.

Nitzan explains: “Shy’s sister heard about the competition and told Shy that he should enter. But he couldn’t do that without first finding a partner.It took him about six weeks to convince me to fill out the form – and when we did, I didn’t think we’d be considered. 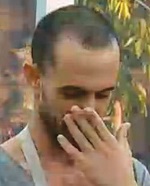 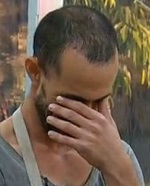 The judges give their verdict on a cake, but Shy can’t watch!

I agreed for a couple of reasons. First, I didn’t think we’d get in; second, it was Shy’s dream; and third, I couldn’t help but think about my great aunt Dolly, who was one of my favorite people in the world, and whose last words were ‘live it up’, so I kind of felt I needed to do this.”

Nitzan says that when they were finally chosen she was completely stunned, but Shy wasn’t.

“We passed every phase of the auditions. I was shocked we got through.”

Nitzan admits that before taking part in the show she wasn’t a big fan of reality TV. 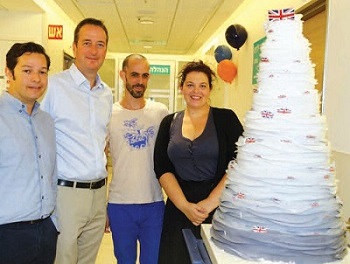 “I’d seen a couple of MasterChef episodes, and a little of The Great British Bake Off, but that was it. However, after we were accepted, I started doing my homework and watched lots of different shows to get an idea of what we’d gotten ourselves into.”

And, she admits, they “went absolutely crazy preparing for the show.We did everything we could. We watched episodes of The Great British Bake Off and did the same assignments. We watched dozens of YouTube videos and copied them.And we tried different taste combinations to figure out what we liked.

“I told Shy we had to do a combination of pistachio and pomegranate, but wasn’t sure how. We wound up doing that in the first episode in the wedding cake.” 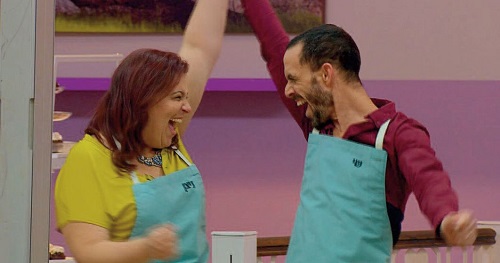 We’ve won! The moment Nitzan and Shy were announced the winners of Bake Off Israel. Their prize: a trip to Zanzibar

Meanwhile, Nitzan says that her family were a little apprehensive about her appearing on TV. “They weren’t crazy about the whole thing at first. They were worried about the exposure and were concerned that the show might pry into my personal life. However, once they realized I was going for it, they totally supported me.”

Filming took place in a large tent in Tel Aviv’s Yarkon Park, and the schedule “was very intense”.Recalls Nitzan: “We would be picked up at 4am and taken to the set. After hair styling and make-up, filming took all day, sometimes till the early evening, sometimes till the middle of the night. Filming varied from12 to 20 hours a day.We would go home and practice on non-filming days.It was the hardest thing I’ve ever done -physically, mentally and emotionally. It was crazy. The schedule, the pressure, the need to be creative, the judges’ reactions. But it was also the best thing I’ve ever done.”

Along the way there were some amusing moments. 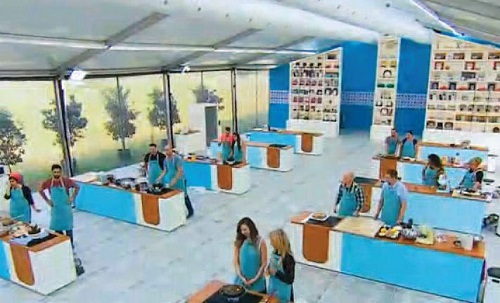 “One of the funniest was when one of the other contestants, Yuval Edelman, a drag queen, came out in full dress and danced as part of the presentation.He was one of my closest friends on the show, and I knew he was so nervous to be up there alone. So without thinking, I got up to dance with him. Shy didn’t want to join in, and later said he didn’t want to be seen dancing on prime time TV in front of all Israel. Only at that moment did I realize that I hadn’t even thought about that aspect!”

Also, right in the middle of filming, Nitzan had adverts to prepare for our ESRAmagazine summer edition. “Thankfully, everyone was so understanding and helpfuland we made it work.”

Nitzan says that the whole experience was a rollercoaster. “I was worried about the other contestants backstabbing and turning on each other. But I was completely surprised. I made so many friends with the other contestants. There are a few who will be pals for life. Some have since become clients as well.”

And what of the future? Nitzan says that she loves baking and will never stop. “I’m working on a blog that takes a new look at baking. I want to make cakes healthier, but still taste as amazing as the decadent versions.”

In the summer, Shy did a pop-up shop for chocolate marshmallow treat, Krembo, in Sarona, and is dreaming up more innovative ideas.

One of the most difficult parts of being on the show was keeping the result a secret for six months – the time difference from the series being filmed and its being aired.

Says Nitzan: “It wasn’t hard not because I wanted to tell. That part was easy because I wanted people to experience the journey with us.It was not letting anything accidentally slip out in conversation and the pressure from friends and colleagues to tell them that was difficult. But in the end I’m glad I was able to keep it such a secret.”

And how did it feel to win? “It was amazing. Right up until the last moment I didn’t believe it. Although Shy was confident all along that we’d win, he was shocked as well. And we were up against some tough competitors.”

Their prize for winning is a seven-day trip to a five-star hotel in Zanzibar, off the African coast. There will also be a few more prizes and awards for being star bakers.

With the accolade comes a touch of fame. Not long after being pronounced winners, Nitzan and Shy were invited by the British Ambassador to Israel, David Quarrey, to bake a cake to celebrate the Queen’s 90th birthday.

“That was an occasion worth doing,” says Nitzan. “We baked a cake 95cm high. It was shown on the evening, but it wasn’t eaten. Instead, we donated it to the children’s hospital at Ichilov. Shy and I went from room to room, and seeing the children’s faces light up at the sight of seeing such a giant cake was amazing.”

Nitzan agrees that she and Shy both worked well together on the show. “We were literally the only couple who didn’t fight at all! Win or lose, this experience would never have ruined our friendship. It’s too strong for that.”

Although she admits that taking part in the show was an amazing experience, she doubts she’ll do anything like it again.

“Shy keeps trying to convince me to sign up with him to The Amazing Race, Big Brother etc, but it’s not gonna happen.”

So it looks like Nitzan has opted for the quiet life from now on.

Well, as quiet as it can be when you’ve got clients to please and deadlines to meet on Israel’s biggest and best magazine for the country’s English-speaking community.