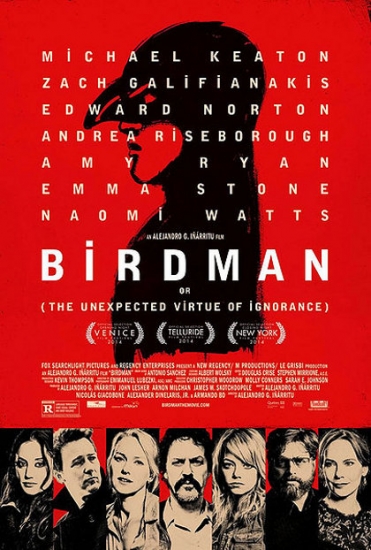 Many of today’s A-list Hollywood actors have turned to starring roles in the hottest Hollywood trend of superhero movies. But we mustn’t forget the game-changing predecessors beginning with Michael Keaton’s realistic and dark take of Batman. 25 years later, he metaphorically steps into costume again in Birdman by playing an aging actor named Riggan who is most famous for his long ago movie role as a comic book superhero.

However, Riggan is a multidimensional artist who battles inner demons, and in his quest to become a true artist he adapts a Raymond Carver story into a Broadway play. Director Alejandro González Iñárritu depicts this struggle in what is reminiscent of many filmic autobiographies about the life of theater actors: ranging from Chaplin’s Limelight (1952) to John Cassavetes’s Opening Night (1977) and Bob Fosse’s All That Jazz (1979) [among others].

More explicit cinematic references are made to Martin Scorsese through overt dialogue and with seemingly endless tracking shots which follow Keaton and his crew through long theatrical corridors, down hallways, and into dressing rooms before the camera steps outside into Manhattan’s illuminatus and gaudy Theater District. The actors also randomly criticize and make reference to contemporary pop culture much like in Robert Altman’s 1990s films about Tinseltown.

Keaton’s strong performance of Riggan is achieved with his recognizable gestures and witty charm, as he reminds us of a strong actor whose career took a sharp turn much like his character in the film. Iñárritu pits Riggan’s theatrical world against the real one in many surreal, dreamlike scenes that are sometimes exaggerated but mostly beautiful. Some of these sequences work well with closeups and low-angle shots, and Riggan is always in or at least close to the camera frame to remind us that this is his story as reiterated by his own voice-over narration.

Michael Lipiner is a doctoral student in film studies at The Hebrew University in Jerusalem, and teaches cinema and English Language Arts. He is a native New Yorker, pub...
More...