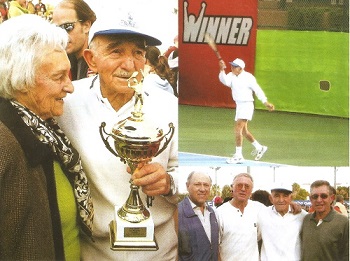 Whilst playing my early morning regular game of tennis one Friday morning I was invited by Kalie Phlen to join him at 9am at the club house. I knew the occasion to be a 90th birthday celebration for members of Kalie's tennis school and his family. Kalie is still a regular playing member of the Raanana tennis club and a force to be reckoned with at that.

Amongst the members of his family present was his sister, Joan Rom, who came from South Africa for the great event. I met Joan when I joined Balfour Park hockey club in Johannesburg in 1948 and was delighted to see her.

The males toasted Kalie with whisky and the ladies settled for something soft, followed by coffee or tea to order provided by the club and accompanied by Kalie's capable wife, Sarah.

What better and more appropriate entertainment could have been provided than the viewing on the t.v. of the final nailbiting stages of the tennis match between our Shahar Peer against Tatiana Golovin during the recent Australian Open Tennis Championships in Melbourne. Shahar Peer's victory gave way to spontaneous roof-raising applause by a bunch of crazy tennis enthusiasts.

Photographs of Kalie together with Shahar Peer were on display. They had been taken on the day that she had won the women's final of the Israeli tennis championships played at the club some weeks before - the same day that Kalie was made an honorary life member of the club.