Shop ‘Books’ Up its Ideas 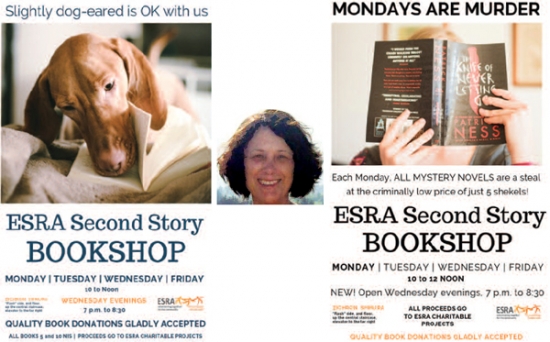 By Lucille Cohen and Jane Krivine

Book lovers in the Five Towns Region have been thrilled to discover the reinvigorated ESRA book shop since its re-launch at the end of May.

Rebranded to wide acclaim as “The ESRA Second Story Bookshop”, it features a host of dynamic new promotions.

Highlight of the new diary is the full day official Grand Re-Opening on Wednesday 25th September from 10am - 8pm featuring a l’chaim, special guests and nibbles in the book shop and adjacent library.

Already, a big sell-out has proven to be the institution of Five Shekel Fridays – an opportunity to find that special book of the “Soog Bet” (Class B) variety with 75 books whisked off the shelves within only two hours on the first day.

Another innovation, new to Israel, is the Concierge Service. Desperately seeking that particular book? No problem! Simply phone, Facebook message, text or email and the superheroes of the bookshop volunteer team will put the word out region-wide to find it for you for a search fee of NIS10.

Fancy a book-swap club with a glass of wine and no strings attached? Another chapter in the revitalisation of the book shop is the free Monthly Book-Swap on the second Wednesday of every month from 7pm to 8.30pm as part of the regular Wednesday evening openings at this time.

Summer saw the launch of half- price Breezy Read offers for light beach reading at half price, but, as autumn draws in, Murder Mystery Mondays will entice aficionados to readings from a suitably thrilling chapter from among the titles on sale. Calming refreshments and nibbles will be proffered to customers while browsing the shelves for books at the “criminally low-priced” NIS5 each.

ESRA Five Towns continues its year round program of local speakers, discovering those eventful lives and intriguing interests hidden behind familiar faces. These illustrated talks are held periodically at 11.30am on Tuesdays adjacent to the book shop.

Bookshop chairperson, Jane Krivine, is delighted with the new arrangements. “With eleven years’ history of running the only second-hand bookshop between Haifa and Netanya we are forging ahead and ignoring the nay-sayers who feared the Kindle would kill book buying. There is still a book-thirsty market out there.”

The bookshop’s early days started in Or Akiva under the auspices of the ESRA Caesarea branch in 2008 and continued for eight years in the rather dingy premises of a non-profit organization which dealt with local social problems.   Despite its not being an ideal spot, the social center did wonderful work, and the ESRA volunteers all loved the manager, Ilanit.

The bookshop operated amid frequent deliveries of food, endless donations of second hand clothes spilling out of bags, huge containers of vegetables, bulky household white goods - all sitting alongside Fiction and Classics until they were moved. It was also a center for newly released prison inmates who were surprisingly well-mannered and accommodating,

One day, volunteer Marion Fredman spotted a first edition, and suggested it might be valuable.  It was The Art of War by Sun Tzu, the first edition of the English translation. Chairperson Jane Krivine checked it out on the Internet and made contact with a leading military bookshop in London. A sale was agreed but not a price. When she took the book for valuation, the bookseller examined the book carefully, raised his eyebrows slightly, and handed her £800 cash. (The full story appeared in ESRAmagazine Issue No. 156, Sep/Oct 2010.)

By now, customers and ESRA members were coming from afar, from Zichron Yaakov to Hadera, so the branch was renamed ESRA Five Towns to cover the region.  The charity in Or Akiva announced it was moving premises and so too did the ESRA book shop.  It has moved three times since then: first to the bomb shelter of a shopping mall in Binyamina, which was not very successful.  As the rooms were needed for storage, the management offered the shop NIS 5,000 to move out - which duly happened. Then it moved to new premises in Binyamina; but over the years the takings were slipping, little by little, month by month.

Last December, the committee was delighted to be granted the opportunity to move to a new facility charging a modest rent in the Ve’ahavta Congregation in Zichron Yaakov, the main English speaking center in the region.

As a Ve’ahavta Congregation member, ESRA committee chairman, Laurence Jacobs, was the first to learn of the option. It was taken up with alacrity by committee members Jane Krivine, Mimi Semuha and Judy Rosenblatt and assisted by Bebe Jacobs, while Susanna Brandon injected new life into the bookshop with an amazing array of promotional concepts.

Susanna says: "I couldn't have asked for a better group of volunteers. They immediately understood what I was trying to do, and they fell right into step. They tackle each new part of the project with enthusiasm, bringing abundant ideas and talents of their own. We're only going to get better and better!"

The fourteen members of the volunteer rota are excited about the innovations and back them to the hilt. They are confident that the new activities will ensure the bookshop a bright future.

The ESRA Second Story Bookshop is open from 10am to 12 noon on Mondays, Tuesdays, Wednesdays and Fridays and from 7pm to 8.30pm on Wednesday evenings.

It is in a room accessed from the balcony corridor of the Ve’ahavta Congregation, 1 HaShmura Street, Zichron Yaakov (on the ‘Flash’ side, 2nd Floor, via the central staircase or the far right elevator.) 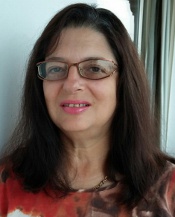 Lucille Cohen was born and educated in Leeds, UK. Her undergraduate, postgraduate degrees and Honorary Research Fellows are from the University of Manchester. She is a former President of the Jewis...
More...