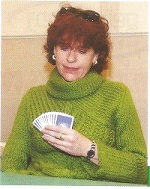 Here we are: we learnt the basics of bidding, we added some useful conventions to our repertoire we don't usually drop too many tricks in defense and our declarer play is reasonable. So what is stopping us? Why do we feel that the good players we face at the club always seem to do the right thing against us?

Yes, experience may have something to do with it and naturally it may in some cases be simply a matter of talent or superior knowledge but when and how can we hope to overcome the obstacles which are holding up our game?

There are three very important things which we must learn and practice when we play:

It may not be easy, especially at first when we are not so used to it; it may even seem at times an impossible task to master within the usual time constraints of your average club tournament, but I can guarantee you that it is the most assured way to let the sun shine over your game.

You will feel like you have entered a new, brighter, world: things will suddenly become much clearer thanks to the enhanced understanding that you will have over most situations that before had you baffled. The first huge help we get to assist us on the way to a good result is the bidding: as soon as that dummy hits the table we should turn our mental calculator on and get counting!

Someone opened the bidding? Let's give him at least 12 points. Someone passed as dealer? He doesn't have 12 points. Did he pass his partner's opening? He has less than 6 points. It all seems so simple and obvious and yet it is very common for players to forget these basic facts during the play.

Look what happens to the declarer in this hand: 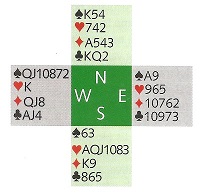 West leads the Queen of spades, which is ducked all round, and continues with the Jack of spades. Again our declarer ducks confidently and nods happily to himself when he sees East take over his partner's Jack of spades with the Ace of spades. Back comes the Ten of spades, taken by West with the Ace of spades, who returns the Ten of spades for the King of spades in dummy, ruffed by East and overruffed by South. Three tricks have gone, that means we must not concede the King of hearts if we want to maintain our contract. Our declarer knows very well how to play a suit with the King of hearts missing. He quickly gets to dummy with a club and plays a heart to the Jack of hearts, finessing the missing monarch. Unfortunately the King of hearts appears on his left and the contract is one down. Our declarer, looking around for sympathy, complains of his bad luck when he played the percentages by going for the finesse. But is it really a matter of bad luck or bad play?

We know that West has opened while East passed out his partner's One spade bid. That surely places him with less than 6 points. So when we see that he holds the Ace of spades, we can for sure place the King of hearts with West. Our only legitimate chance to capture the King of hearts and make our contract is to find it singleton and that's what we should hope for since, on the basis of the auction and the play so far, the finesse has now become a 0% play, not 50% as our declared assumed! If the King of hearts is indeed singleton, the careful declarer will receive the reward he deserves for having counted the points that the bidding assigned to each player.

Let us move to another hand and see if counting can help us there too: 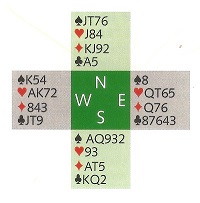 West leads the Ace of hearts and continues with the King of hearts and another heart, ruffed in hand. Declarer goes to dummy with the Ace of clubs and finesses the Jack of spades losing to West's King of spades. The Jack of clubs comes back, taken in hand and after two more rounds of trumps we arrive at the crucial moment where we must guess the position of the Queen of diamonds to make our game.

But is it really a guess?

Well, it is for those who do not know how to count and forget the bidding: West passed initially and yet showed up already with Ace and King of diamonds, King of spades and Jack of clubs. Unless he is very shy by nature, he cannot possibly have the Queen of diamonds too, as that would give him a total of 13 points.

So our declarer can confidently place the Queen of diamonds in East and play accordingly, thus making his contract.

To recap: correct, meticulous counting is a sure way to improve our game and, keeping in mind those very important numbers obtained from analyzing the bidding, can help us an awful lot in making decisions that to others will seem inspired but that, in reality, are as easy as adding up 2 and 2.

Migry Zur Campanile is a full time professional bridge teacher and player. Twice world champion and many times winner of international events, she is the Chief Editor of the Israeli Bridge Magazine and can be contacted at migry@migry.com.