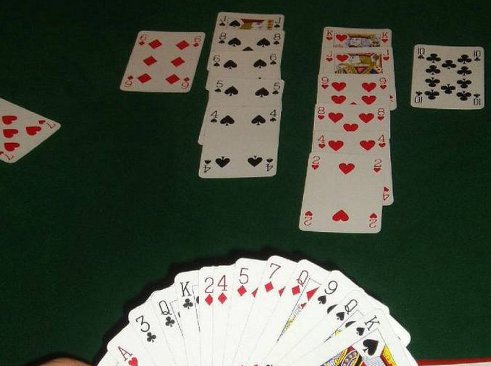 In Bridge, like life, you get good breaks and bad breaks. Winners take advantage of the former and overcome the latter wherever possible.  But what actually constitutes a bad break in bridge? How often is the familiar “Sorry partner, but the suit broke badly” really justified?  Take, for example the following hand, where South, after opening 2NT, ends up in what appears to be a fairly “momma-poppa” 3NT contract:

West made the natural lead of the ♠Q.  Declarer won the ♠A in his hand to preserve dummy’s ♠K as an entry to the diamonds. Next he cashed the ♦A, both opponents following with low cards, and continued with the ♦Q. Again a low card appears from West. Declarer played low from dummy, keeping the lead in the closed hand. Now he to dummy with the ♠K and played the ♦K.   Since West still held the ♦J and there was no way back to the table to cash the fifth diamond, the contract failed a trick short.  Did the diamonds break badly? Well, in a sense, yes but statistically, the a priori chance of the opponents’ diamonds breaking 4-2 is 48%, higher than the 36% probability of a 3-3 break.  Theoretically, declarer’s play would have been successful if diamonds had broken 3-3 or one of the opponents had held the doubleton ♦J.  Of all the 15 possible doubletons, 5 of them contain that card, in other words a third of the time the suit breaks 4-2 – an effective 16% probability - so declarer had a 52% chance of success.  In the actual play, when a small card appeared from West on the second round of diamonds, the theoretical possibilities of the suit breaking 6-0 or West having a singleton have been eliminated and the probabilities of a 3-3 break are now around 42% and the chance of East holding a doubleton 54%, and specifically the doubleton ♦J, 18%. Declarer’s chance of success had increased to around 60%.

What would have happened if declarer had overtaken the ♦Q with dummy’s ♦K?  As we can see, the ♦9 appears from East on that trick. Continuing a diamond from dummy, declarer can knock out the ♦J and the untouched ªK still provides the entry to dummy to cash 2 diamond tricks and a total of 9 tricks for the contract.  “All very well when you see all four hands”, you may say, but this play works whenever diamonds are 3-3 or East has either the ♦9 or the ♦J doubleton. This occurs two thirds of the time East has a doubleton and increases the chance of success by an additional 18% to 78% - significantly better odds.

A study of the percentages is not everyone’s cup of tea but one should at least understand some of the basics and the probabilities associated with the possible divisions of the opponents’ cards in the more common occurrences of their combined holding of 4, 5 and 6 cards in a given suit.  I suggest having a look at http://en.wikipedia.org/wiki/Bridge_probabilities.

The next hand came up on the Internet. I was sitting East. South reached game in hearts after opening 1H and receiving a 3D pre-emptive weak jump overcall from my partner. I swallowed hard and stifled the temptation to double but despite this, declarer anticipated the bad break in trumps from the bidding and made the contract by executing an expert play, known as a trump coup, against me.  Note that normally a 3-2 split occurs 68% of the time, a 4-1 split 28%.)

Declarer won the opening ♦K lead with the ♦A and, realizing that if hearts were not 3-2, her only hope was that West had a singleton honor, played the ♥2 from her hand.  My partner won with the Knave and continued with the ♦K which declarer ruffed small. Declarer now played a small spade to dummy’s ♠J which I won with the ♠A.  Declarer won my club continuation with the Queen in her hand and played the ♠Q, making the vital play of overtaking with dummy’s ♠K, thereby gaining entry to the open hand.  She now ruffed a diamond and cashed two club tricks, ending up in dummy with the ♣A, leaving the following 4-card position:

She now played a spade from dummy which she trumped with the ♥6, reducing her trump holding to the same length as mine. We both now held 3 hearts.  When she now exited her hand with the ♥9, I was left powerless to prevent her from scoring 2 of the last 3 tricks and bringing home the contract.  “Well played, op.”

The key play in this trump coup or trump endplay was the reduction of her trump holding to that of mine.  For the purist, my partner could have prevented her successfully executing the coup by playing a club, say, rather than the diamond, after winning the second trick with the ♥J. But that is the stuff of another story.