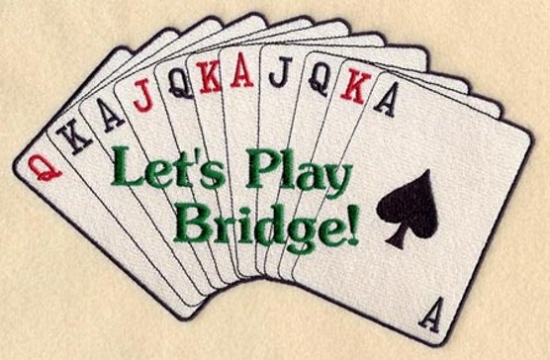 Three weeks ago the famed Baker Street Bridge Club in London witnessed the finals of the annual Blue-Ribbon Team Competition.   As improbable as it may seem, the hushed and expectant spectators in the open room found none other than the world-famous Dr. Watson and Sherlock Holmes sitting North-South, representing the Conan Doyle Team. Paired against them were Holmes’s archenemy Professor Moriarty, seated West, and the opposing team captain, the relatively unknown expert and confidant of the criminal mastermind, Colonel Sebastian Moran.

The finals were played over 36 boards.  Predictably, the first half was a closely fought affair.  Brilliance and cunning abounded. There was no more than one IMP in the match going into the last board of the session:  Moran, in the dealer’s seat, opened the bidding with 1♥.  The bidding as shown below, ended with the master sleuth as declarer in a vulnerable spade game.  Unknown to the players, of course, the Moran pair in the closed room had reached the same contact, failing by one trick, so a big swing was at stake.

Moriarty led a small heart which, after some thought, Holmes won in hand and played a club to dummy’s ♣J.   Not unsurprisingly, Moran won with the ♣A and returned a heart.  Holmes won the ♥A and played the ♠A. A gasp went out from the audience as Moran’s ♠K dropped under Ace. The Professor nearly had an apoplexy.   As the rest of the hand unfolded, it turned out that clubs broke 2-4 and Moriarty held the ♦A over declarer’s ♦K, so Holmes had to loose 2 diamond tricks. But he still brought home the contract and put his team into a useful lead going into the second half.

During the ensuing break, Watson accosted his friend: “I say, Holmes, spectacular play on the last hand but surely the odds of the ♠K being with Moriarty and the finesse being on, were far greater than finding it singleton with Moran? If Moriarty did hold the ♠K, then he could not have had the ♦A – he did, after all, pass his partner’s opening bid – but in that case, the contract was safe.”

“Quite right, my friend, statistically speaking”, Holmes replied, “But, this was all about card placing. If the spade finesse was on it didn’t matter whether I took it or not because the ♦A would then have had to be with East, as you said.  However, the only threat to the contact was that the ♠K was with Moran and the ♦A was with Moriarty. In such a case, the only hope, albeit small, was that the ♠K was singleton.  Elementary, not so?”

For the second half, Holmes and Watson, remained in the open room, but swapped their North-South seats.  Moriarty, in the “away” team, chose to play Watson’s cards as South in the closed room. This proved to be a good tactic and his team rapidly narrowed the gap and were only two IMPs behind going into the final board.   East, playing ACOL, opened a non-vulnerable weak 1NT (12-14 points) and this time it was Watson who was declarer in the vulnerable spade game. It was all or nothing as Moriarty had made the contract in the closed room.

West led the ♥10, won by East’s ♥K.  East now cashed the♦A, felling Watson’s King, and continued with a small diamond which the Doctor trumped. Watson now played a trump. East won with his ♠A and played another diamond, forcing Watson to once again ruff. The trump suit behaved well so, after drawing the outstanding trumps, all that remained for Watson was to pick up the club for the contract. He won the first round of clubs in dummy with the ♣K., both opponents playing low cards. On the lead of the §K from dummy, East played the ♣10 and Watson now had to choose.  To finesse or not to finesse for the ♣Q - that was the question.

Watson finessed. A loud groan went up from the spectators as West’s doubleton Queen won the trick and the match. In the post-mortem that followed, Watson apologized profusely, explaining: “I know that the odds favor playing for the drop of the Queen when one has nine cards in a suit but with only 4 diamonds between us and the favorable trump break, I expected clubs to be 3-1. Anyway, I had only seen 11 points of East’s 12-14 so I was pretty confident the ♣Q was with him.” “An elementary mistake, my dear Watson. It’s not that I don’t sympathize with your logic but again it’s a case of placing the opponents’ cards. You simply had to go back to the opening lead. Surely if West had had a singleton club, he would have lead it in the hope of getting a ruff?”

Apologies to Sir Arthur Conan Doyle for borrowing his characters and to you, dear readers, for the unhappy outcome of the match.  The forces of good don’t always triumph over evil. Sometimes the bad guys win. And that, too, is of course, pretty elementary.