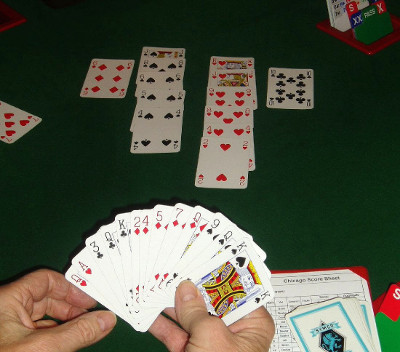 On average, one can expect that more than 70% of the hands played at the bridge table will be in suit contracts. Correspondingly, the proper management of trumps is an essential part of declarer play and is a subject which comes up time and time again in bridge articles at all levels.

In“Trump for Tricks” (ESRA 189), I reiterated that, when playing trump contracts, while one generally wants to clear the opponents’ hands of low trump cards as soon as possible lest they use them to ruff one’s high-card winners in the side suits, there are several situations where it was necessary to hold off drawing trumps. I went on to give examples of the use of trumps to eliminate losers and generate tricks in their own right.

In this article I want to change tack somewhat.  Consider for a moment the situation in No Trump contracts when the opponents have eliminated your stoppers in a given suit.  They are then in a position to run that suit and score long card winners to possibly defeat your contract. You do not have the protection of trumps to stop them from doing so. Well, exactly the same situation can arise in a trump contract if you lose control of the trump suit to the point where you are helpless to prevent them scoring tricks in side suits.

Consider the following hand where I, sitting in the South seat, found myself as declarer in 2 Hearts.  My partner had opened the bidding with 1 Diamond, East had made a takeout double and after I bid 1 Heart, West bid 1 Spade and partner’s 2 Hearts ended the bidding.

East won his partner’s opening lead of a small spade with the ♠A and I won his continuation with the ♠K in my hand.  I then led a small heart towards dummy. West followed with the  ©K and I won the trick with dummy’s ©A. I next played the ♠Q from dummy on which I discarded the ¨5 from my hand. So far so good. But then I made the fatal error of playing a trump from dummy.  I won West’s ©10 with the ©Q, cashed dummy’s high diamonds and trumped the third round of that suit with my©8, leaving:

The hand was doomed.  Whatever I played now, the opponents would take the last 5 tricks. As it transpired, I led a club which East won with the §J.  He next played his ©J, felling my ©9 and dummy’s ©5 and his subsequent play of the ©7 put our trumps to bed. We had lost control of the trump suit and were defenseless to prevent the opponents from cashing the last two tricks.  A pitiful 1 down due to careless play, yet again in a part-score contract.

No, the correct play after cashing dummy’s ♠Q was not to play trumps but rather cash the two high diamonds and lead a club. Best defense would be for East to win with the § K and play the ©J which I would win with the ©Q for my sixth trick

The § Q from my hand would be taken by West with the § A, but the contract would be safe.  Any lead from him would allow me to score the two additional tricks needed for the contract. In fact, the lead of the ¨10 would allow me to make a further three tricks:  After ruffing the diamond in hand and a club in dummy, leading dummy’s last spade would leave East powerless to prevent my winning the ©9 for a ninth trick.

My closing words of wisdom – as much to myself as to you readers:  Be particularly careful when trumps break badly lest you lose control of the trump suit.  Rather than drawing trumps, consider letting the opponents first win the outside-suit tricks which you cannot avoid losing while you are still in control of the hand.