It was a quiet morning at ESRA books in Modiin when a tall gentleman entered. Rene Gold, my co-volunteer, knew him well as he was a regular customer at the bookshop. I had never encountered him there in the year that I had been volunteering, yet somehow he seemed familiar. But I couldn’t put my finger on where I might have seen him before.

Ehud enlightened us with his knowledge of Hebrew literature and even found an autographed copy of Amos Oz's poetry. He casually mentioned that he volunteered as well, but it was "nothing important". "Where do you volunteer?" Rene and I both asked him. "Tel Hashomer." And then it hit me.

Ehud was the man who had not only evacuated my son from the helicopter at the Tel Hashomer helipad on that fateful day of July 31, 2014, but he had also offered assistance during Reuven’s long hospitalization.

On that day in July, my phone had rung as I was entering my house at 8:30 pm. My son said, "Ima, I've been injured." A nurse immediately came on the line and said that my son had been hurt but that he was ok. He was being taken into surgery and not to worry and not to rush to the hospital. Of course I dropped everything and rushed to Tel Hashomer Hospital. I managed to get a glimpse of Reuven as he was being wheeled into surgery. Four hours later the surgeon emerged and informed us that he was fine and that he had suffered a bone injury.

Little did I know that the "bone injury" was actually a very serious one and that his leg was in danger of being amputated. A “patzmar” or missile had landed very close by and had taken a big chunk out of his leg, including several inches of bone. Reuven was hospitalized for six weeks, and underwent two major surgeries. We were there night and day.

One day Reuven had to be x-rayed. A very pleasant older man came and took him to the radiology department. We chatted while we waited. He then informed me that he was the person who had evacuated Reuven from the helicopter along with his commander, who had needed to have his leg amputated. He was so nice and so empathetic that I felt uplifted just being around him. This man was Ehud, the man who is a regular in our bookshop!

Reuven was transferred to the rehab department of Tel Hashomer, where he stayed for another 2 ½ months. He is home now, going to daily rehab. It will still be a long recovery, and hopefully Reuven will walk normally without pain. But the warmth and care of all those I came into contact with during those long days in the hospital will never be forgotten. And Ehud, you do a very important job! 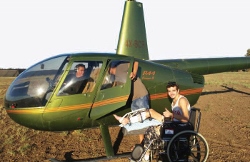 Lissa and son Reuven at a Rehab event and Thumbs up ... Reuven about to take a ride in a helicopter