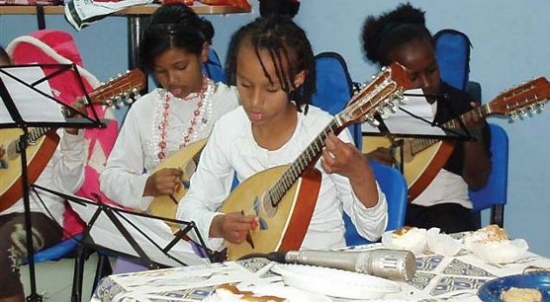 Chanukah is known for a miracle. This Chanukah will always be remembered as a miracle at the Hefziba Community Center in Netanya where ESRA hosted a party for its School of Music for Excellence on the 4th night of the festival.

The modest hall was packed. Most of the 100 guests were parents and siblings of the participants. This is the first time that the parents have participated in such numbers at any event in the community and it's only thanks to our students in the Students Build a Neighborhood Project that this "miracle" took place - we hope it will be the first of many. ESRA guests and the girls' families were treated to a lot of surprises.

Some 35 girls from 3rd to 6th grades filled every single person present with a lot of joy and pride. The girls showed their talents playing the flute and mandolins with absolute accuracy, reading their music as well. All these girls who excelled have been in the school of music for less than a year.

Twelve girls who have been working together for one year make up the choir.  They burst into song after Richard Stein, head of ESRA’s fundraising committee, had lit the Chanukah candles, with a rich medley of the festival’s songs starting with Maoz Tzur. The whole crowd was inspired to join in with the girls when they reached the grand finale.

The girls surprised the audience by singing a well known song in English called Blessing. That evening they dedicated it to ESRA which was very emotional to listen to. “May the wind always be at your back." Did they know that this was an old Irish prayer? They continued with songs in different voices and showed tremendous discipline and talent.

Last but far from least, the “Banot ha Nishama” (The Soul Girls) did a series of Ethiopian ethnic dances. They were delightful to watch with their shoulders moving in all directions. This group was started and trained by the manager of the center, and is now being sponsored by our ESRA Excellence Program.

What an evening. What a lot of talent rolled into that exhilarating hour in the Hefziba neighborhood on the 4th night of Chanukah 2009.

Joan (Stein) Weisman came to Israel in August 1972 and two weeks later started teaching. She lived in Jerusalem but traveled to Kiryat Malachi to work in two elementary schools. After four years of...
More...