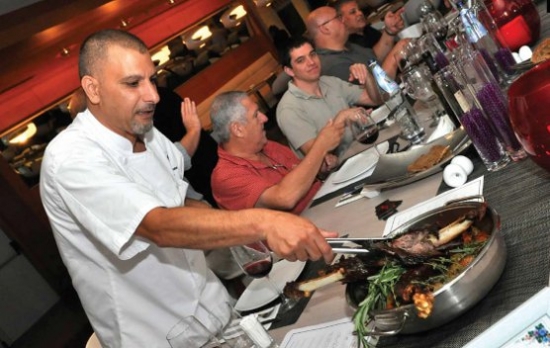 Recently, I had the opportunity to sit with Chef Alon Gonen in his Tel Aviv house. We talked about food and wine over some local Israeli cheeses and what he let me pick from his wine collection. First, we tasted a chilled bottle of 2010 Vitkin Riesling that paired well with pepper jack cheese and Gouda which we sliced with his razor sharp chef’s knife.

I had met Alon several times at different culinary events in Israel or we had bumped into each other at wineries as we both sampled wines at their source. A few months ago, I was lucky enough to be invited to one of his wine and food pairings for writers at his current gig as the executive chef at the Crown Plaza City Center’s “11th Floor” restaurant where and when I was convinced we’d eventually swap stories one evening. That evening featured Israel’s Teperburg wines paired with Alon’s cooking and served as proof of Alon’s assertion that he considers wine to be “another dish on the table” and that he takes great pride in being one of the few chefs in Israel who “is serious about wine”.

As we moved on to an aromatic bottle of 2009 Recanati Syrah/Viognier, we got into how his interest in wine with food has much to do with how he started as a chef. While training in Herzliya’s renowned Tadmor school, one of Israel’s most prestigious culinary programs, Alon’s class was asked if anyone spoke French. Alon answered in the affirmative and quickly found himself continuing his studies as an exchange student and intern at the Michelin star Gran Monarch restaurant in Chartier, France, 70 kilometers south of Paris. He had only planned to be there a month but after one month he must have made quite an impression, for the head chef asked him if he wanted to continue on salary as one of 20 international chefs. Alon wanted to consult with his family but his mentor pressed that if he wanted the position he would have to decide then at that moment without any consultation or equivocation whether he would sign up for a whole year. It was probably meant to be a test of his resolve at becoming a serious chef and as it played out Alon continued to work there in France for the next few years.

Alon developed under that tutelage but also developed a style of his own. Even though he’s quite capable of preparing an elaborate meal, he’s fond of taking fresh ingredients and letting them be the star of a meal. “A perfectly seared steak or a good piece of fish with the right amount of salt, pepper and butter” is what Alon favors for his own table, prepared on his garden grill just a short walk from the state-of-the-art kitchen at the Crown Plaza. His garden features an assortment of fresh fruit including lychees and passionflower which find their way into dishes or as a raw treat to guests.

Alon would return from France to Israel to eventually launch the Speedo restaurant in Tel Aviv’s swanky port district. It was a source of honor for him that his mentor from France would come for the opening, since he had not previously ever left France and at the time of his invitation hadn’t even possessed a passport and Alon even offered to pay for the ticket to seal the deal. As many chefs of note tend to do, Alon moved on to other ventures, including a one-and-a-half-year stint at Tel Aviv’s noteworthy Italian Don Vito, before winding up with the first restaurant of his own - El Barrio - which he believes was Tel Aviv’s “first authentic tapas bar”, and which he helmed for five years before a motivated buyer convinced him to sell. He took that opportunity and with his cash-filled pockets went back to his culinary roots for a few months' respite in Chartier, France. On returning to Israel he went to work as a chef without a kitchen for three years, working mostly at events for Israeli wineries such as notable boutiques, Agur, Bravdo, Tulip and Tzora, where he would highlight how to pair food well with wine. He continues this focus at the Crown Plaza today.

As we finished the evening over a rare premium Californian bottle of 2000 Francis Coppola Director’s Reserve Cabernet Sauvignon, he was thankful that I had chosen to open this wine which neither of us had tried before but soon relished. Alon was leaving the next day to open up the kitchen for Israel’s Chinese Embassy, where he would be staying in another Crown Plaza Hotel that featured 2,000 rooms and 12 restaurants. This would be his third Embassy opening as he had previously launched kitchens for Israel’s embassies in Paris and Berlin, but as much as he enjoys the challenge and the travel his heart beckons him always to return to his beloved Tel Aviv.