Hose are those because they aren’t mine?

When the health fund’s pharmacy called me to pick up my orthopedic hose, I took the box from the old pair – where I’d stored the prescription order – with me.

I didn’t understand the markings and codes on the box but I noticed they were not the same, and queried the pharmacist. He in turn summoned the stockman in charge of orders, who immediately told me that the new pair were not mine! He re-ordered my hose using a photocopy of the prescription and writing on it a code-number from a florescent sticker on the old box, which apparently identifies my specific hose size, type etc.

I got the correct pair a week later ... and am saving the end labels of both boxes. This time they match.

Getting in a cat flap over pet food

Some time ago I noticed my cats, who usually tear into their food, were acting as though it gave them electric shocks. Since most of them are old, I mash the pate with a fork ... and discovered bone slivers in it!

I made contact with the Israeli distributor, who at first gave me the old wheeze “Nobody else has complained!” to which I replied “No, they just stop buying!” After a very lively, ‘Israeli-style’ discussion, I explained why I bothered to call: my cats like their products' flavors better than the competition. We finally settled that they needed the stamped batch numbers off the tins to file a complaint with the manufacturer abroad, and I agreed to test all their flavors again, noting down batch numbers.

Sadly, the first two tins I opened had so much bone ‘gravel’ (bits, slivers and 0.7cm chunks) that I had to throw them out. Not all their flavors have the same consistency: some just have bits of unidentified flesh or grains, often visible to the naked eye even without mashing.

Update: I’m returning all 42 tins of this product to my outlet, including 22 of 24 tins the distributor sent me gratis. There's no way of getting the bone fragments out short of sieving each tin through fine steel mesh ... and I don’t have the time or patience to do the Quality Assurance the manufacturer should have done in the first place. 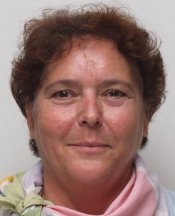 Siri Jones-Rosen is by profession a hotel receptionist. She has worked at a variety of jobs both in and apart from the tourist industry: secretary, translator, switchboard operator, movie extr...
More...