The castle of Paphos

Story and photos by Irving Spitz

Mention Cyprus and most people visualize a cloudless sky, pristine beaches and a glorious blue sea. However, there is another side to the island.

In addition, in the mountainous Troodos region in the center of the island, there are pine forests and quaint villages with narrow cobbled streets offering a glimpse of village life where old traditions are still practiced. This area is ideal for walks in summer and for skiing in winter.

This review covers travel in the scenic coastal region of this enchanted island. After a 45-minute flight from Ben- Gurion Airport, we landed in Larnaca (population 144,000), on the southern coast of the island. We were met by our outstanding and knowledgeable guide, Christakis Constantinou, who was our constant companion for the next six days.

Larnaca boasts a palm tree-lined promenade, guarded by a medieval castle. One of the main attractions of the city is the Church of Saint Lazarus, an outstanding example of Byzantine architecture. Lazarus came to Cyprus after his resurrection by Jesus in Jerusalem and the Church was built over his tomb.

From Larnaca is a short drive to Limassol (population 237,000), the second largest city of Cyprus, home of the island’s main port, and a bustling holiday resort. 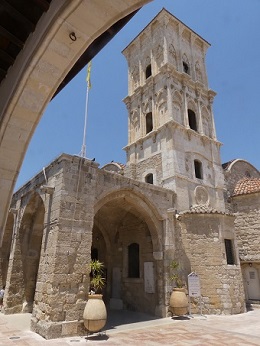 Its waterfront marina is lined with palm trees and has a plethora of boutiques, galleries, restaurants, cafes and shops.

The Limassol castle, with its two-meter thick walls, was built to protect the city and the port. Originally constructed in Byzantine times, the present edifice dates from the Ottoman period. It was used as a prison by the British and has now been converted into a museum.

Interestingly enough, this castle hosted the wedding of Richard the Lionheart, who conquered Cyprus in 1191 before proceeding to the Holy Land on the Third Crusade where he was unsuccessful in wresting control of Jerusalem from the Muslims.

We were lodged at the five-star Royal Apollonia Hotel, a luxurious resort situated on the beach. Our room included a jacuzzi on the porch. It was a unique experience to relax here with a magnificent view of the Mediterranean.

Food and service were unsurpassed in its fine Meze Greek restaurant. With its swimming pool, private beach, spa and outstanding service, this hotel has received a certificate of excellence from Trip Advisor.

Our first stop the next day was Kolossi Castle, a Crusader stronghold that was of great strategic importance in the Middle Ages. Initially it was under the control of the Knights Hospitallers and served as their adminstrative HQ – La Commanderie.

In the 14th century, it came temporarily under the domain of the Knights Templars. These Knights belonged to religious-military orders which were established in Jerusalem during the First Crusade. The present castle, built in 1454, consists of a single three-storey structure.

During their stay in Cyprus, the Knights produced and exported a sweet wine, known as Commandaria, named after the Grand Commanderie region, and is one of the oldest continually produced wines in the world.

From Kolossi, it was a short drive to Kourion. Listed as a UNESCO World Heritage site, Kourion’s archaeological remains are amongst the most impressive on the island.

The magnificent restored Greco-Roman theater was built in the second century BCE and is used for open-air performances.

Adjacent to the theater are the remains of a prominent building, the House of Eustolios. Originally a private villa, it was turned into a public recreation center during the early Christian period and has preserved Roman baths as well as outstanding mosaics, which reflect the transition of Cyprus from paganism to Christianity.

Near Kolossi is the sanctuary of Apollo Hylates, which was one of the main religious centers of ancient Cyprus where Apollo was worshipped. There are also ruins of a stadium, which could accommodate 6,000 spectators.

Cyprus was the legendary birthplace of Aphrodite, the Greek goddess of love and beauty. According to Greek mythology, it was near Paphos that the goddess emerged from the waves. This was at Petra tou Romiou, one of the most beautiful coastlines with a rock jutting into the Mediterranean.

We had lunch in a restaurant commanding an unforgettable view of this rock and could see the frolicking visitors on the enchanting beach. Throughout antiquity, Cyprus, and especially Paphos, was one of the most important places, where the worship of the goddess flourished.

Paphos, situated on the south-west coast, was one of the early capitals of the island. Today the entire picturesque town of Paphos (population 90,000) is a UNESCO World Heritage Site. Its focal point is the quaint fishing harbor with its mediaeval castle surrounded by cafes and restaurants.

The original Byzantine stronghold was constructed to protect the harbor. It was rebuilt by the Lusignans, destroyed by the Venetians and erected again by the Ottomans.

In the archaeological park of Paphos there are magnificent Roman and Byzantine mosaics dating from the second to the fifth centuries CE.

They are seen in villas belonging to wealthy noblemen with depictions of the Olympian gods, including hunting scenes, Narcissus gazing at his image reflected in a pool and the musical competition between the satyr Marsyas and Apollo, the god of music, as well as many others.

Of interest was a representation of the Magen David and a mirror image of the Nazi swastika symbol, which actually was an ancient Asian symbol. 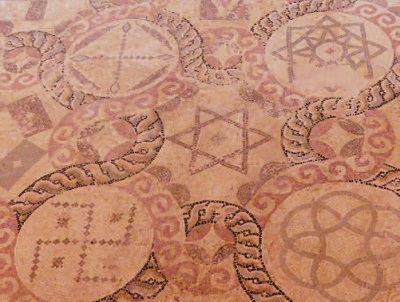 Also situated here are the Tombs of the Kings, monumental underground tombs decorated with Doric pillars carved out of rock dating to the Hellenistic and Roman periods. They were probably tombs of high-ranking officials.  In some tombs, the burial chambers open onto a peristyle atrium.

The site of the Agia Solomoni Church in Paphos consists of an an open court, surrounded by rock-cut chambers dating from the Hellenistic period. Inside are remains of twelfth century frescoes.

This is also known as the Chapel of “the Seven Maccabees”. Legend has it that this is the burial site of the seven Maccabean Brothers, who were martyred together with their mother in Judea around 174 BCE by Antiochus Epiphanes (2 Maccabees 7).

Their Jewish mother, Agia Solomoni, became a saint after the death of her sons. This Church may have been a synagogue in Roman times. Above the church is a terebinth tree with branches adorned by colorful rags left by the faithful as offerings to the saint and thought to cure the ailments of those who hang it.

Our hotel was the very comfortable, recently renovated King Jason Paphos Hotel. It was wonderful to return to the hotel after an intense day of travelling and relax in one of the many pools. The hotel manager, Andreas Kyriakou, has been at this establishment since it opened in 1994 and was totally dedicated to the guests’ comfort. Nothing missed his attention to detail.

Near Paphos is the village of Geroskipou, which means “Sacred Garden”. This was dedicated to Aphrodite. In the village is a ninth century five-domed Byzantine church, making it one of only two such churches on the whole island.

North of Paphos is the peninsula known as Akamas. The region is home to some of the most stunning areas of natural beauty on the island. Situated there are the Baths of Aphrodite, a small grotto shaded by a fig tree, where Aphrodite bathed. From this elevation, there is a splendid view of the coastal town of Latchi.

Until the 1974 Turkish invasion, Famagusta, situated in the Turkish zone of the island, was formally Cyprus’s main port and holiday resort. Today it is largely deserted, its Greek Cypriot population having fled. Its 26 hotels remain uninhabited.

It was in the neighboring city of Salamis that Jews participated in the great rebellion against the Romans in 117 CE and are reported to have massacred its inhabitants. After quelling the revolt, the Romans expelled the Jews and forbade them to return to Cyprus but this was soon rescinded.

South of Famagusta, are the villages of Ayia Napa and Protaras, which today have expanded into bustling resorts which teem with tourists. It is a paradise for beachgoers. One of the main attractions of the area is the Natural Forest Park of Cape Greco with its cliffs, caves and coves and breathtaking views of the coastline.

We stayed at the recently renovated St Elias Resort in Protaras. Situated on a hill above the town, it commands a wonderful viewpoint. This large resort is set amidst beautiful gardens and has over 150 well-equipped suites. It is a perfect family resort hotel with several pools including a water park, and a children’s pool as well as fine restaurants. Frequent shuttle services transport hotel guests on the short ride to the beach. This was the perfect place to unwind after our six days of strenuous touring.

■Additional pictures of Cyprus and other trips can be seen at www.irvingspitz.com and at www.pbase.com/irvspitz

Advertisers Directory 192
From Bible to Bedouins and Battles

Irving Spitz was born in Johannesburg, South Africa.  He holds MD, PhD and DSc degrees from the Witwatersrand University in Johannesburg, and is a Fellow of the Royal College of Physicians of ...
More...