David Marcus, who is approaching 100, gives hope to anyone dreading old age.

He’s active and aware, leads a busy life crammed with all kinds of activities and definitely has all his marbles.

I spent an hour in his company on behalf of ESRAmagazine and now have to somehow compress this near century of life into an article. It was a fascinating encounter which took place in Beth Protea, where he now lives.

We laughed together at some of his exploits, cried together over his beloved wife of 67 years, Doreen, who died two years ago, and I came away marveling that someone can be very old and still appear young at heart.

David was born in Iasi, Rumania at the height of the First World War, in 1915. As a ten-year-old he joined Hashomer Hatsair like other Jewish children at the time. It was a youth movement which prepared young Jews to settle in Palestine, teaching them about developing the land.

He studied in a commercial school and planned to go on ‘hachshara’ as soon as he received the right certificate, but it never arrived.

In 1937, two years before the Second World War broke out, he was called up to do a year’s army service in Rumania. His older brother, who had gone to Rhodesia many years before, came home for a visit and told David he must come back with him.

“I couldn’t leave my parents,” recalls David, “and anyway, if I had to leave it would have been to Palestine, not Africa.”

As Europe edged towards war, and the position of Jews became ever more perilous, David finally agreed to move to Bulawayo.

With no English, he began working in his brother’s ladies wear store which was called Lianora.

“I worked in the office and looked after the accounts,” he recalls.

In 1939, after war broke out in Europe, he volunteered to serve, and as he was considered an enemy alien, he did territorial service, on weekends and evenings. In 1941 he was called up for full-time service in a special unit made up of other ‘enemy aliens’.

“I became a corporal, then a sergeant and did instruction work in spite of my inadequate English,” he says. “In Iasi, no Jew could expect to gain any rank at all, but in Rhodesia I was to end up as a reserve officer.”

In 1943, now a part of the South African army, he was shipped overseas and found himself in Cairo. He saw plenty of action in the war including being part of the Raiding Forces which landed in occupied Greece.

“The Germans fled and we stayed there until the end of the war,” he says.

Before settling down to civilian life, he managed to get to Palestine and visited friends and family here. But real life called him back to Bulawayo.

He had already met his wife to be, Doreen, before the war. She was 17 then, and the daughter of Henry Herbstein, one of the prominent leaders of the Jewish community and a great Zionist.

David had been invited to tea while still a soldier and after that encounter he had sent her a book of Leonardo da Vinci’s paintings as a gift. He still has the book in his possession and showed it to me, yellowed with age and crumbling.

She wrote back and they corresponded for four years during the war. 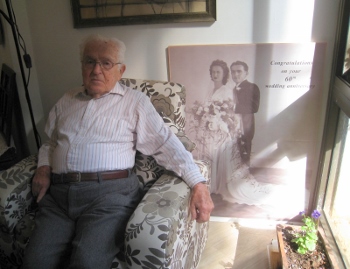 David Marcus today ... and on his wedding to Doreen Herbstein in June 1946

They had a beautiful home and three sons were born, today in their sixties.

“We thought of Israel but at the start of our married life we had no money”.

“There were about twenty Jewish families and I was the leader of the community,” he says. “We had a Friday minyan and a rabbi would come from the Copperbelt for the chagim.”

After ten years of this they decided the time had come to move to Israel. Doreen was head of Wizo in Rhodesia and in 1961 had been here at a Wizo conference.

They finally arrived in 1966. David went into business, first running an automatic laundry and dry-cleaners in Ramat Gan and later he became an importer of men’s suiting, a job he continued until he retired at 70.

He and Doreen had a beautiful home in Kfar Shmaryahu until they moved to an apartment in Raanana. She taught in the American School and never really learned Hebrew.

“We were together for 67 years,” he says, “and we were considered an example as a married couple.”

Doreen died two years ago and one of his regrets is that she never lived to enjoy the facilities of Beth Protea. David certainly does, attending all the evening activities and using the gym on a regular basis, swimming every morning and enjoying the beautifully presented meals in the dining-room.

He misses Doreen terribly but has some compensation in his grandchildren and great grandchildren, now seven of them.

“It’s the sort of retirement I could not even dream of,” he says.

Nancy Kaiser
2015-03-11
What a beautiful story.My Granddaughter who is married to one of the Marcus family sent it to me--in Australia.I knew that David,s 100yr birthday was soon and it was an honour to read his life story I lost my beloved husband some years ago now and one never forgets the special moments spent together.He was also Jewish--his father,s family from Europe.

Gloria Deutsch is originally from Liverpool England. After gaining a B.A. degree in English she worked as a librarian. Gloria came to live in Israel in November 1973 and for the last 36 years has l...
More...