General view of the Lower Himalayas Below: A Tibetan student

After travelling all day, we arrived at Dharamshala, a large town situated in the lower Himalayas of India. Several satellite villages can be found along the narrow roads that lead up the mountains from the town, and since these roads are too narrow for tour buses, we were transferred to cars for the short journey up to Mcleodganj, and our hotel. 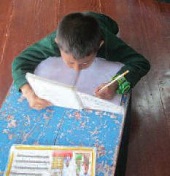 As we entered the hotel lobby and saw the brightly colored decorated walls, I wondered whether I had lost my way and ended up in Santa’s Grotto. This was so different from the usual spacious elegance of modern hotel lobbies. Beautifully painted walls lined with many niches containing Tibetan style prayer wheels, statuettes and other ornaments. The hotel is managed and staffed by Tibetan exiles who have settled there since they had to leave Tibet in 1959.

Mcleodganj is named after Sir Donald Friel Mcleod, who was viceroy of the Punjab area and is buried in the graveyard of the protestant St John in the Wilderness Church of North India. James Bruce, 8th Earl of Elgin and Governor General and Viceroy of India 1861-3, is also buried here (NOT the notorious Lord Elgin who took the Greek Parthenon marble reliefs to the British Museum in London).

From around 1840, Dharamshala was a British Military station and administration center, and in the 1860s, the 66th Gurkha light infantry moved here and eventually became the 1st Gurkha Rifles. There is a memorial to the Gurkhas in the town.

After checking in to the hotel, we were taken by car further up the mountain, through the town center which seemed to be a large bazaar of Tibetan handicrafts and souvenirs. The road narrowed as it climbed further upward through hilly terrain covered with forests. To one side there was a steep drop with no barriers or cement blocks to prevent vehicles from falling over the edge, and since it was already dark it was definitely a scary ride.

We left the cars, seemingly in the middle of nowhere, and began a walk through a village in darkness along unmade paths, with the only light coming from the modest simple buildings. We walked for a long time, at one point passing by shops with signs written in Hebrew. Eventually, just when I was getting tired of the difficulties and wondering if we would ever get there, I saw the last thing that I expected to see in this primitive northern Indian village, far away from anywhere, a replica straight ahead of us of 770 Eastern Parkway, the Lubavitcher Rebbe’s house, in Brooklyn!

Safely inside, we sat around a large table, and so much food was brought to us, a colorful and delicious combination of Mediterranean and Indian dishes, which we really enjoyed.

We then had to trek back the way we came to our hotel for the night.

Breakfast the following day was taken on the hotel’s balcony that had expansive views over the Kangra valley, and over the hills toward the Dalai Lama’s Palace and Temple. This area is affectionately known as Little Lhasa, after the name of the capital city the exiles left back in Tibet.

The government in exile is based here, as well as various welfare and relief organizations.

Our day among the Tibetan Buddhist exiles began at the museum that tells their story of persecution, hardships, and losses of life, which began in 1950 and still continues. 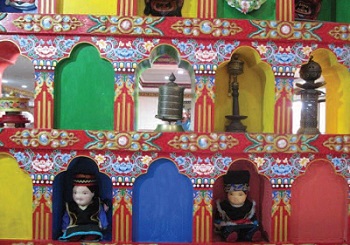 The colorful lobby of the hotel in Mcleodganj, a village next to Dharamshala

The leader of the People’s Republic of China, Mao Zedong, announced the Cultural Revolution in 1966, and the administration continued on its path of destruction of Tibetan traditional life, the Tibetan culture and environment,    by further persecution, torture, and murder of the Buddhist population as a means of imposing its ideology. Around a million men, women and children are said to have been killed, and Chinese were moved into Tibet for resettlement.

By 1959, the Chinese were attacking Lhasa and life had become so unbearable, even dangerous, for the Buddhists, that their leader, the Dalai Lama, realizing the dangers, decided to leave for a safer home.

India offered the Dalai Lama and his followers some land in the area of Dharamshala, and there they settled and began to rebuild their lives. Today there exists, in this temporary home of 60 years, a lively and active community with institutions to help and guide individuals. Many of the shops we passed were selling items home-made by traditional methods, which gave a livelihood to the women who couldn’t get out to work, and we would pass many monks walking along the streets. There are Tibetan-run businesses, restaurants, and cottage industries, providing work for anyone who needs it.  We visited a Tibetan crafts workshop and center, where young people are taught the traditional workmanship of their homeland,  and produce beautiful items of furniture and textiles.

Although the Tibetans have been made welcome in India, they keep their hope that one day they will return to their homeland; so they have not naturalized and become citizens of India. They continue to wear their traditional clothes, speak their own language, and eat their style of foods.

The Tibetans have built their Temple, modelled on their Temple in Lhasa, the capital of Tibet, and the Dalai Llama’s palace stands proudly at the top of the hill.

They haven’t forgotten who they are.

One of the Dalai Lama’s priorities from the start was to make sure that the children be educated in their language, religion, customs and heritage. We visited the children’s village where 1,400 children learn daily, and we saw mainly the younger ones. In a class of 4-7 year olds I was overawed to see how focused the children were in their learning, how well behaved, happy and smiling, as they grow up as children of Tibetan exiles. The caring dedication and warmth of the teachers had to my mind a direct influence on the children's attitudes. 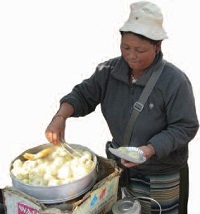 My mind took me back a hundred years to when my grandparents left the pogroms and oppressions of Eastern Europe, hoping to make a new life in the freer west. Their priority, despite their impoverished lives, was also to educate their children and give them a chance of a better life. Jews had been in exile from their homeland for almost two thousand years. It would take at least another fifty years before they had an opportunity to return home to their own Jewish State.

Here, in this isolated and difficult-to-access village, live Chabad rabbis and their families for part of the year, providing all necessary Jewish services.

We may understand the meaning of exile to be ‘enforced from a lack of choice’, but it can also mean a prolonged absence from home.

The Chabad rabbis are also new and foreign to the area, but their outreach to not only tourists, but also to the lost young Jewish souls who happen to be in the area, is most necessary. They have also made the place as close to home as possible without compromise, and all the facilities necessary for living an orthodox Jewish life are made available, thereby also preserving their values, customs and heritage while temporarily away from home.

Milestones 195
From Bible to Bedouins and Battles