Discovering the largest synagogue in Slovakia

A general view of the Slovakia synagogue’s interior looking east. The chairs are used for musical concerts, not services, and modern art works are currently displayed on the walls.

We recently returned from a short break in Slovakia, walking in the hills and sightseeing in Bratislava. Whilst staying in the middle of nowhere we were amazed to discover this synagogue, which was the largest in Slovakia before WWII. So, I was moved to write an article for the magazine. The whole holiday was surreal as we went during Operation Protective Edge so we were checking the Israeli news all the time and watching the foreign news coverage which was abominable. After visiting the synagogue and reading about the richness of the Jewish life in the area nurtured by Jews who had been thrown out of their previous homes and set up their lives successfully again, I was overcome by an immense emotional feeling of the hate and simple jealousy of those who want to destroy us even now, and just burst into tears.

Our annual summer getaway from the Israeli heat led us this year to the Tatra mountains in Slovakia. By complete chance, we chose a destination on the train line three hours from Bratislava. Liptovsky Mikulas, is a sleepy town in the valley between the High and Low Tatras. On our first evening's exploration of the town we followed an intriguing sign 'synagoga' which led us to a large neo classical exterior adorned by a magen david and ten commandments on its eastern facade.

The absence of an organized footpath or sign led us to believe it was not in use, although the building had obviously been renovated in recent years. On enquiry at the town's information office we learned that it is indeed open every day to the public between 10am and 4pm and currently houses an art exhibition of a local artist.

The following morning we duly investigated and were amazed at what we found. 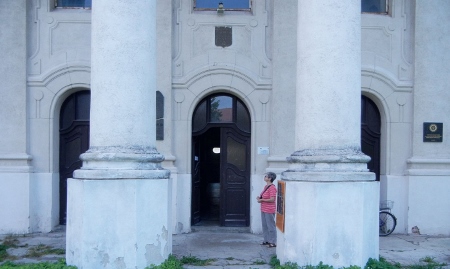 Writer Frankie Cronin at the entrance to the synagogue

The present synagogue was built in 1906 by Leopold Baumhorn, an architect from Budapest, using steel beams and columns which support an upper ladies' gallery. The stunning, original, art nouveau interior decorated with rich blue and gold stucco uses traditional Jewish designs and is in remarkably good condition. The intact central cupola 17 meters high features blue colored window panes. The impressive Aron Hakodesh had double doors to a small room which housed the Sifrei Torah, and the original surround artwork is still visible. Before renovation by the city in the 1990s the building was used for storage, so much of the stone balustrade around the bimah area was destroyed, but one can still appreciate the grandeur of the building.

Jewish life in Liptovsy Mikulas began in the 1720’s when discrimination by Charles VI in the areas of Bohemia, Moravia and Silesia caused Jews to move eastwards to Northern Hungary, where a local squire, Samuel Pongrac, rented them houses on the town square. Very quickly the Jewish immigrants started trading in wood, leather, textiles, spirits and tobacco. Word soon spread, and, by the end of the 18th century Jews made up a third of the town’s population. A religious community was set up including a synagogue, elementary school and yeshiva. Liberalization of Hungarian politics in the mid-19th century allowed Jews to become estate managers, solicitors and doctors. In 1865 a Jewish mayor was appointed in Liptovsky Mikulas, the first of many public officials in (then) Hungary.

Many famous rabbis were attracted to the town and a rich traditional Jewish life thrived. Later Jews from German countries began to arrive, who brought with them Moses Mendelsohn’s new translation of the Bible and the growing Enlightenment Movement (Neologists). New schools were set up which taught the sciences, geography and history in addition to the traditional Jewish studies. This movement led, of course, to a split in the community and many of the orthodox leaders left the area. 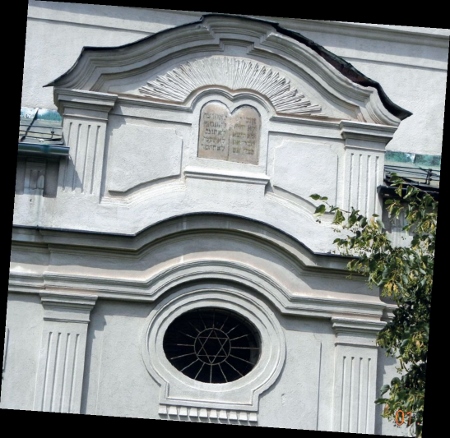 The outside of the synagogue (left) showing the original cupola.

By the end of the 19th century however, the community once again came together and built a new synagogue. After two fires in the town which partially destroyed the synagogue, they decided to build a new larger construction which is the building that still exists today.

During WWII Nazi Germany took over the newly created Slovak State which passed anti-Jewish laws. The first deportation from Liptovsky Mikulas was in March 1942 - 885 Jewish citizens of the town perished in the Nazi death camps. A memorial and list of the dead can be seen in the town center where a section of the Museum shows the importance of Jewish life in the area.

Frankie (Linda) Cronin Frankie, a pharmacist, came to live in Israel from England in 1977 to Herzliya, moving to Raanana in 1995. In 2008 she and husband Mike moved to live in the Galilee. Frankie ...
More...