On Either Side of the Divide 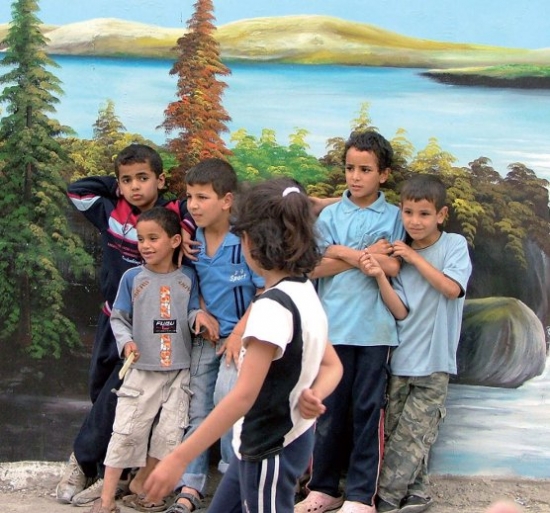 The Wadi Ara Arab Muslim village of Barta’a is less than a five-minute drive away from Route 65, one of the busiest roads in Israel.

I first visited Barta’a in the mid 1980s when the off-the-beaten-track village tucked away in a corner of the Dotan Valley and hugging the lower slopes of the Amir mountain range was a fine example of a more than sleepy hamlet.

Involved in the nearby educational center Givat Haviva’s efforts to build up a department offering seminars in different languages to kibbutz volunteers and visiting groups from abroad dealing with the Middle East conflict, I visited Barta’a and many other large and small Wadi Ara and West Bank Palestinian villages and Jewish settlements in my quest to find interesting people, places, relationships and physical vantage points one could incorporate in such seminars and tours.

As a journalist I was also hoping to find relevant items to write about. On that score and many others it has been and will surely continue to be, an overwhelming experience.

Wadi Ara is also known as the Little Triangle, the three points being Umm-el-Fahm straddling one side of Route 65, Kfar Kara on the other side of the major highway and further inland the third point, Baka al-Gharbiya.

Twenty years ago Barta’a was roughly one quarter of what it is today and boasted just a couple of shops and mosques and was very quiet during the day as most of the men folk left the village to work out of the area.

In 1967 the Green Line as a ‘border’ was somewhat rubbed out. However, residents were free to visit each other and other extended family living deeper inside the West Bank or inside the State of Israel.

In 1987 the Kabha clan once more found itself in the eye of the storm with the outbreak of the first uprising (intifada).

Palestinian East Barta’a participated to the fullest in the uprising whilst their Israeli citizenship holding West Barta’a relatives were caught in the middle, emotionally torn bystanders, as Israeli soldiers fought with members of their immediate family on the other side of the rubbish filled ditch running through the middle of the village, a not-so-green line and former border between – as the local population phrase it – “over here and over there.”

The same expression is used whichever side of the line one might be standing on and this also goes for another oft heard phrase, “us and them.” If you are “over here” then “they” are “over there.”

The 1993 Oslo Accords brought new hope, with Jericho and Gaza first, giving autonomous areas for to Palestinian people to run their own lives. East Barta’a ended up becoming a ‘B’ area, with the Palestinian Authority being responsible for infrastructure but with Israel having the final say as far as security is concerned.

With the realization that customers from Israel, Arab and Jew alike, would no longer forage in the West Bank to do their shopping – considerably cheaper than in the State of Israel – Palestinian shopkeepers, businessmen of all descriptions as well as laborers who were no longer allowed across the Green Line began to move themselves to sites as close as possible to the former border as soon as construction of the security fence began. In Barta’a the fence was constructed two meters behind them. They not only encamped in Barta’a on the east side of the divide, but also placed shipping containers cum ‘shops’ across the ditch over which the central road passes.

Over the last seven years, since the outbreak of the second intifada in the year 2000, East Barta’a has become a honky-tonk boomtown boasting over 600 businesses and thriving industrial concerns where Palestinians manufacture garments and bed linen for export and a multitude of other merchandise for sale to the bargain hunting and tough, bartering Israeli customers.

The majority of workers in the East Barta’a sweatshop factories of the new millennium are women from Palestinian West Bank villages such as Yabed on the other side of the security fence. The cutters, machinists and packers have permission to pass through the Reichan checkpoint behind Barta’a on a daily basis to work in Area B – but not to cross over the Green Line.

Hundreds of men take the same route daily, clutching their papers allowing them to work in the portion of land between the Green Line and the Israeli side of the fence which, these days, I refer to as ‘Limboland’, neither here nor there, and where one can find both Jewish settlers and Palestinians in small villages living side by side.

Not a small number of Palestinian men also have permission to work over the Green Line and cross daily to labor in agriculture or construction in Israeli towns and villages. Many of the men arrive back at the checkpoint in the afternoon carrying sacks of oranges or grapefruits on their backs as they amble through a mesh tunnel leading to those who check their papers and packages and do a body search.

Some of the Palestinians who pass through the checkpoint actually have Israeli citizenship as they are married to Israeli Arab women, many from villages in the Wadi Ara area – particularly Barta’a. The majority cannot pass through the checkpoint in their own vehicles thus leading to lines of waiting taxis on the ‘Limboland’ side of the facility. Some are official Palestinian Ministry of Transport green plated yellow taxis but the majority are private cars with white Palestinian plates or yellow Israeli plates if the driver is married to an Israeli citizen. They all charge 5 shekels a head for the six-minute ride to or from East Barta’a.

Israeli Arabs have also crossed the line to open up businesses “over there” in East Barta’a, employing Palestinians and enjoying the unusual situation of not having to pay any taxes in Area ‘B’ under the Palestinian Authority. Nobody does.

Both sides of the divide in Barta’a are complicated – the people and the relationships between them. The physical vantage points from where one can see, hear about and also experience the multi-layered complexities caused by the stroke of a pen on a map in 1949 show how Barta’a developed into a village with a split personality.

The hustle and bustle, the condition of many of the buildings and roads and the lack of infrastructure in general in the present times boomtown of East Barta’a is somewhat reminiscent of the early days of the Wild West. On a shop door here and there remain faded posters of a waving Yasser Arafat, a huge faded poster of the army uniform and keffiyah clad Arafat hangs from the top of a large wooden pole, looking down on a busy and dangerous T-junction. A prayer rug with Arafat’s image hangs on a hook outside one of the carpet shops, and posters of Saddam Hussein were spotted on the wall of a busy barber’s shop.

Waving in the breeze above East Barta’a’s girls’ high school, a black, white, red and green Palestinian flag boldly stands out against the background of the yellow domed mosque behind.

No posters of Arafat and Saddam Hussein or Palestinian flags can be seen in the streets of West Barta’a, but no Israeli flags are flying either.

Barta’a has become the Dizengoff Center of Wadi Ara attracting mostly Arab shoppers from as far away as the Upper Galilee and hoards from the local Israeli Arab villages and two cities in the immediate area, Umm el-Fahm and Baka al-Gharbiya.

What started as my quest to gain more knowledge and build up a relationship with the people of the Wadi Ara region – down the road and around the corner, one could say, from my kibbutz abode and, as the crow flies, minutes from Givat Haviva, my place of work, has become a 20 year sojourn in what seems to be a never-ending story.