Eli Libenson watching one of the Shabbat morning services which is streamed live from the shul in Cleveland, Ohio

My late mother, Alyce Kohn Kaplan, was the salutatorian of her confirmation class in 1933 at The Temple on the Heights. That synagogue, located in Cleveland, Ohio, is today known by its Hebrew name, B'nai Jeshurun.

B’nai Jeshurun is one of the few Conservative congregations in America that live-stream and then archive their Shabbat morning services. My husband, Eli, faithfully follows those services on our computer from our home in Israel.

A year ago Eli renewed an old high school friendship. His friend, Steve, a retired social worker living in Cleveland, had just written a novel. Eli emailed him to congratulate him and they have been corresponding ever since.

In one of his letters, Steve told Eli that he no longer belonged to a congregation and would welcome a recommendation. Eli recommended B’nai Jeshurun, Steve tried it and liked it.  Steve attended High Holiday services there and wrote us that he would next be at B'nai Jeshurun on Shabbat morning October 10.

There is a nice custom at B’nai Jeshurun that after the Torah reading congregants line up to request the rabbi say a Mi Sheberach (a blessing for a sick person) for their dear ones. The congregant tells the rabbi the name of the sick person and the rabbi repeats it aloud. Eli had an idea. Why shouldn’t Steve get into that line and name an ill person who is dear to him. This would also give us the opportunity to see him “live” on our computer screen.

Imagine our surprise when we spotted Steve online and he said my name when his turn came. Unfortunately, I have been ill for the past few months, but we never expected Steve would give my name. I was so touched. It is most unusual for sick persons to actually be present during their own Mi Sheberach, since they are usually too ill to attend the service. I have since watched this section of the service several times, and I am moved anew each time. 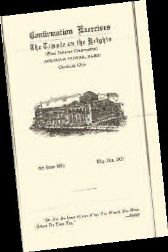 May 1933: Confirmation Exercises and the Order of Services with Alyce Kohn’s name

Dale Sonenklare
2015-12-07
What a touching story. We remember our visit with you and Eli last June . It was a highlight of our trip. This Shabbat and everyone here after we will add your name to our mishaberach list. Much love, Dale
Debby
2015-12-08
Lovely and most touching! Much love!
Dona Malter
2015-12-08
Wonderful article and a way to remember our past. Our thoughts and mi sheberach prayers are with you as well as our love and hugs from a distance. Dona and Eric Malter and Family
Diane Abrams
2015-12-08
Dear Suzy, What a touching article. I have been doing a Mi Shebrach for you and Rita every Shabbat at services at Temple Beth Zion in Brookline. My visit with you and Eli was a high point of my visit during Succoth. With love, Diane
Linda Pinck
2015-12-08
What a lovely article , brought Alice to mind, clearly, and the whole Libenson family A few years ago when I was ill our then congregational Rabbi would visit me frequently and every Friday afternoon he would sing a MiSheberach to me and always brought me to tears. I can understand how you feel in seeing Steve do it for you

Advertisers Directory 182
Milestones 182
Kabbalah For All

Suzy Libenson grew up in Erie, Pennsylvania. She studied English and Journalism at the University of Michigan, Ann Arbor, where she met her husband, Eli. In 1984, they made aliyah with their three ...
More...