Project coordinator Limor Davidoff with her students from Neot Shaked

The energy is palpable. The air is bursting with enthusiasm. Evidence of friendship and camaraderie is everywhere. It's happy energy, infused with excitement. It's the happiness of accomplishment lighting up a pathway into a brighter future. It's the Students Build a Community end-of-year event.

There are several distinguishable groups among those in attendance. They fill the lobby of the impressive Ir Yamim community center in Netanya, tables laden with refreshments a beckoning focal point. The largest and most vibrant group is the schoolchildren. They've completed an academic year under the wing of a mentor who not only acted as an older sibling and tutor, but also a life role-model. Together with their mentor, they made good progress at school and began to enjoy the confidence of succeeding where before they were lagging behind. And tonight, they're excited to be receiving recognition for their success, to be performing or watching their friends perform, and having their parents there to share it all.

The next group is the university students, the mentors. They glow with a more mature excitement and satisfaction. Their concern and affection for the children they have tutored during the year is readily apparent, with a hug here, a pat on the head there, exchanged laughter and smiles all around. The students are in the happy position of giving and receiving. ESRA's Students Build a Community project has allowed them to complete their higher education by giving them financial support in the form of free housing in a needy community. In exchange, they each took four local children under their wing, devoting six hours a week to tutoring them. But the designated number of hours was always stretched. The students' doors were always open and they became an integral part of the children's lives, of their families and of the community.

The parents are an easily identifiable group, some in more traditional Ethiopian dress. They seem bemused by the raucous energy of their children, but resigned that this is the Israeli way. They share their pride in their children and their gratitude for the guidance that helped them succeed.

And finally, there are the people who take pride in supporting the project, from those who put it all together and made it happen, both from ESRA and the Netanya Municipality, to those who devote their time to ensuring its smooth running, as well as those who are simply ESRA members and know that even in some small way, they have contributed to this amazing project. This group mostly just looks around and kvells. 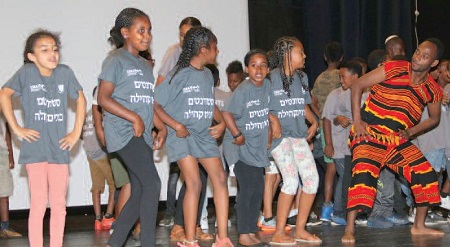 Our pupils dancing together with Einsarra, an authentic Ethiopian band

The evening's program was kicked off with words from the project partners, ESRA's Nina Zuck, Projects Chairperson, and Cynthia Yaakobi, Project Coordinator, Netanya Municipality's Ofer Orenstein, City Council Member, and Shiri Haguel-Saidon, Deputy Mayor. Next, the student emcees shared their backgrounds as immigrants from Ethiopia, and their impressions of the year's activities. Then the schoolchildren themselves took to the stage, delighting the audience with performances from ethnic dancing, to songs in a choir ensemble, duos and solos. Each performer, called to the stage as a representative of their community, was met with enthusiastic cheers from their neighborhood-proud school friends. A professional ethnic Ethiopian dance troupe, Einsarra, absolutely wowed the audience, and children were invited onto the stage to dance with them, echoing their movements. Finally, all 140 children participating in the project filled the stage, together with the 35 students, creating one big lively crowd of excited smiles, mirrored on every face in the audience as they exited the hall.

Two special speakers at the event, both graduates of the SBC project, were Neomi Meshasha, and Elad Elimelech. Today, they have not only completed their studies with ESRA's help, they have very successfully planted themselves in their chosen careers. Neomi Meshasha is an Attorney at Law in the Tel Aviv Municipality Prosecutor’s Office, and Elad Elimelech, Attorney at Law, has opened his own law firm in Haifa. These two are fine examples of the achievements that the project nurtures, helping our young people become contributing members of society.

The project's impact cannot be stated too strongly. Not only do the students provide wonderfully positive role models for the neighborhood schoolchildren    Neomi Meshasha was herself an immigrant from Ethiopia - but the experience of giving stays with them. The students maintain contact with the schoolchildren, and as Elad Elimelech explained (a sabra whose grandparents emigrated from Morocco) he gained an understanding of diverse cultures and experienced the deep satisfaction of making a difference, which prompted his vow to provide pro bono assistance to the Ethiopian community. 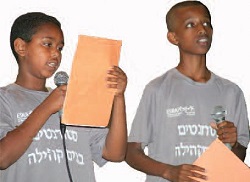 A big moment for two pupils on the stage

This year's end-of-year event marked ten years of the project's continued success. It all began with the fortunate juxtaposition of ESRA volunteer, Hadassah Birnbaum, working in Netanya's Municipal Welfare Department, and Ofer Orenstein, member of the City Council. Ofer approached her with the idea of starting a project similar to one running in Beersheva. Three ESRA members promptly travelled to the southern city to see the project in action and came back and proposed it to the ESRA Projects Committee. Nina Zuck was already at the helm when the project finally began operations in the Heftziba community of Netanya in 2007. With clear evidence of children's grades improving and even property values in the community increasing as the entire neighborhood became transformed, further SCB projects were set in motion in Netanya – in Nordau in 2011, Sela in 2014, and in Neot Shaked in 2015. Gradually, the project expanded so that the project's students experiencing financial difficulties could also receive a grant towards tuition in exchange for increased hours of tutoring. Over the years, we've seen students devote themselves to the local children year after year. We've seen them graduate and embark on their chosen careers. And we've seen schoolchildren and communities thrive and flourish.

To date, the Students Build a Community project has enriched the lives of nearly one hundred students, close to a thousand schoolchildren and four communities – cause for pride indeed. And it's all down to ESRA's dedicated and hardworking volunteers, its generous donors, and its wonderful partnerships with the Netanya Municipality and the directors of Netanya's community centers. In the end, the willingness of everyone involved to work towards being better, really does make it happen. And every paying ESRA member can be proud of their small part in helping to make it so.