A sea of faces . . . some of those who attended the inaugural meeting of ESRA Haifa

The hall was full to capacity at the inaugural meeting of ESRA's newest branch in the city of Haifa on June 15.

More than 60 people came along to hear local geotechnical engineer Sam Frydman, Emeritus Professor at the Technion, talk about the fascinating historical and modern aspects of the Temple Mount, sinkholes around the Dead Sea and earthquakes in the Holy Land.

Both Melvyn and Harry welcomed the guests, explained the purposes of ESRA as a social meeting point, to encourage members to volunteer in different ways in the community and to raise funds for local needy causes.

Melvyn pointed out that there are several other active Anglo organizations in the city and that ESRA Haifa is looking forward to planning events, not in opposition, but in coordination with them. 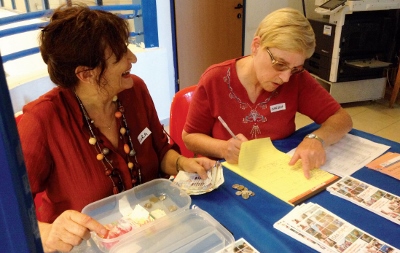 Prof Frydman’s talk was followed by refreshments prepared by members of the committee, and a pleasant social evening renewing acquaintances.

Many thanks to Or Hadash Haifa Israel Reform Movement in Haifa, for the use of their excellent premises; to Cora Tresman and Marsha Ohayon on the door; and to all those committee members who helped.

Frankie (Linda) Cronin Frankie, a pharmacist, came to live in Israel from England in 1977 to Herzliya, moving to Raanana in 1995. In 2008 she and husband Mike moved to live in the Galilee. Frankie ...
More...