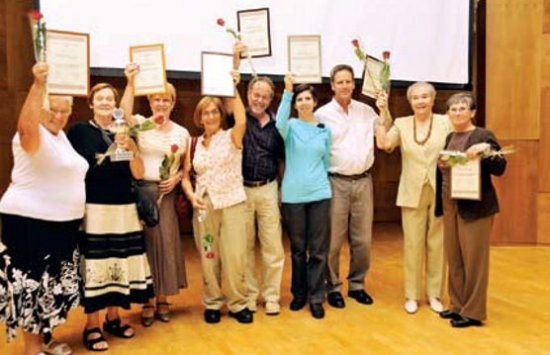 Ros and Henry were born in Australia. They married in 1967 on Israel's Independence Day and immediately came to volunteer here during the Six Day War, staying on for a couple of years as teachers in Nahariya. Back in Australia they completed their studies and started a family. They made aliyah in 1974. Both worked in their profession as high school teachers until their retirement. Now, they divide their time between six grandchildren, gardening, gym, quilting (Ros), carpentry (Henry) and volunteering for ESRA. They work together in ESRA's Right-Track Centers in Netanya. Ros also organizes the English Without Borders tutoring program in conversational English, and Henry is chairman of ESRA Netanya.

Annette was born in Milwaukee, Wisconsin and made aliyah in 1971 with her husband, Morris, and three daughters. She was administrative assistant to a UNDP project for improving and developing computer professionals and was captivated by the field of systems analysis. In 1978 she became a programmer and systems analyst and worked for many different organizations. Since retiring, Annette has volunteered her professional knowledge to help create and maintain database systems for ESRA and other organizations.

Shuka was born in Israel and educated at the Tel Aviv University receiving both a BA Economics and an MBA. He also graduated from Bank Hapoalim’s managers' training course. He has 30 years of experience as V.P. & C.F.O in leading private and public companies in the fields of industry, communications and hi-tech. He also served as a senior management member, and controlled groups of employees of various sizes. Shuka completed his army service as a major and was chief communications officer of an armored brigade. He joined ESRA as a treasurer four years ago and devotes many hours to the organization.

Susan grew up in Manchester, England, where she volunteered in the Citizens Advice Bureau for eighteen years and later with the Probation and Aftercare Service helping battered wives and other disadvantaged people. After completing DSS tribunals Susan became a magistrate, a position she held for twenty years. She is a founder member of Care Concern, a bereavement support group where she trained as a counselor. Susan and Pincus made aliyah four years ago to join their children in Israel. She was introduced to ESRA on a trip to the Dead Sea. Susan suggested a support and counseling project which she initiated, developed and has coordinated with great success for the last three years. The group today has fourteen counselors who have helped dozens of individuals.

Freda and her husband Ralph made aliyah from Pretoria, South Africa in 1980 and spent six months at the absorption center in Raanana. Whilst there, they attended an ESRA meeting and became long-standing volunteers. Freda started by delivering magazines in Raanana. When the Russian immigration began she helped ESRA’s shop in the basement of Hasmashbir in Raanana, as well as taking requests for welfare assistance by needy Russian immigrants. Freda has been a volunteer in ESRA’s Raanana office for many years, was the first ESRA Raanana chairperson and served for many years both as chairperson and co-chairperson.

Born in Wynberg, Capetown, Alice joined the Zionist youth movement at age 10. It was the beginning of a lifelong relationship with Zionism. On leaving school she joined the staff of the Zionist office and became editor of a youth magazine which maintained contact with young Jews who lived in small communities. Many of those readers live in Israel today. In 1956 Alice and her late husband David came on aliyah and settled on a small moshav, Givat Shapiro, where they both took an active part in their community. In 1995 Alice joined the ESRA Ethiopian embroidery project and spent fourteen years helping make it the success that it is today. For the last two years she has single-handedly coordinated the running of the shop in Netanya.

Aggie was born in Hungary and is a Holocaust survivor. She lived in the United States and Brazil before making aliyah.  Aggie is a retired hotel professional and volunteer community worker. She joined ESRA Tel Aviv twelve years ago and is the events coordinator and organizes lectures and museum visits. Aggie is also a member of the ESRA program committee.

Hannah and Les made aliyah thirty-one years ago from Australia, with five of their six children. Although a maths and science teacher, Hannah became a full-time Mum and enjoyed gardening, which prepared her for her venture in Israel. They had intended to be semiretired after making aliyah, and to use their expertise for growing plants suitable for Israel's soil and climate conditions. This venture resulted in a very large and diverse nursery which they created in Ein Vered. In time they handed over the running of the nursery to their son and Hannah formed HANNAH'S ESRA NURSERY which she ran with volunteers, and donated all the proceeds to ESRA. The nursery has now closed, although Hannah, together with one volunteer, continues to grow and develop plants.

Ruth was born and grew up in Liverpool, England. Her first teenage taste of volunteering was with the Jewish Youth Voluntary Service, painting the homes of clients of the social services, and working with the 35's in which her mother was active. After university she moved to London where she qualified as a chartered accountant and married Francis. Ruth and Francis made aliyah in 1982. Ruth worked for many years in various financial positions, during which time their two daughters and their son were born. She took a break from work in 2004 and became active in ESRA, coordinating the tutoring in Raanana and giving invaluable assistance to the volunteer division. Ruth has now gone back to work but still coordinates the tutoring in Raanana. She also created ESRAlist together with Naomi Ariel.

Val Kantor came to live in Israel from South Africa in 1979 with her husband and 4 children. She first became active in ESRA in 1996 and has run a hotline, was the befrienders coordinator and voluntee...
More...