by Barbara Abraham Category: Issue No. 158 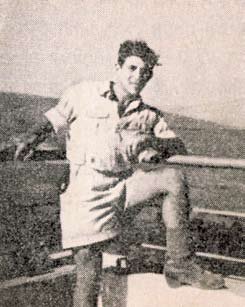 One of the subjects approached when studying creative writing is how real life can transmit more emotion to us than pure imagination - think of the saying, "Fact is stranger than fiction". And indeed life has taught me that. Memories that reinstated themselves for me a short time ago belong to this category and so I wish to share them with you.

We are now celebrating 100 years of kibbutz life in Israel; let me take you back to 1947 - the establishment of Kibbutz Maayan Baruch in the Upper Galilee - a stone's throw to the north lies the Lebanese border and just to the east the original border with Syria. The site was simply waste land surrounded on three sides by hillsides laden with basalt rocks and, opening up southwards, the Hula Valley with its bulrush-lined marshes and wild life running and flying free.

Picture there a group of the young Habonim pioneers mainly from South Africa and America, who together with Palmach trainees,  prepare the land for kibbutz living. Small, simple wooden huts, basic farm equipment operated with determination to make the barren land productive. In the surrounding hills in spite of Hagana protection there remain paltry bands of Arab marauders ready for action.

There is mating and there are marriages, the first babies are born but there is also one couple searching for the kibbutz lifestyle with a little blonde-haired boy of six who has now reached school age.

Another scene - Eilat 1964 - the development of tourism to this jewel (as it was) founded on the shores of the Red Sea which washed over the abundant and beautiful coral reefs along its shoreline. The rich plethora of colorful sea-life making this a haven for divers - and fishermen; the construction of the first four star hotels, one of which was the Queen of Sheba; Arkia Inland Airlines adding the eighty seater Herald aircrafts to its sparse fleet of Dakotas; the influx of tourists from overseas searching for the warmth of the winter sun; the need for employees, with a knowledge of languages. Friendships were forged between the English speaking employees one of whom grew up in Rhodesia although he was born in Israel, and, following his inner calling returned to his land of birth to serve in the army, after which the search for employment brought him to the now developing town of Eilat.

He moved from his job in the Queen of Sheba Hotel to Arkia, as did another Anglo friend. Over their years of employment within the airline they remained friends even when she moved to work in the Tel Aviv office. In spite of their friendship he only referred vaguely to his early childhood and always changed the subject. The normal trials and tribulations of life continued and contact was lost when she moved away.

Thirty years passed by and then a phone rang in one of the small white villas in the new kibbutz village of Maayan Baruch.

And then the full story emerged as they met over drinks. Just as the calling had come to Yoram to return to Israel so it had come for him to return to the far north, and reaching retirement, he and his wife had also moved to one of the new kibbutz villages. And why so? We go back to the newly founded kibbutz where the little blonde boy had to go to school and so he had, riding along a rock-strewn path across Wadi Ayun to Kibbutz Kfar Giladi in a small cart drawn by a couple of mules. They left early just as light was coming into the winter sky.

"Wait a minute," she placed her glass on the table, "Are you the Yoram in that ambush?"

He nods, feeling the moisture of tears to come building up in his eyes.

"I read about this one Remembrance Day at the closing of the ceremony in the kibbutz club but I never thought that child Yoram was you. Not once did you say you had been in Maayan Baruch even when I sent my children there to be educated in a kibbutz environment after my divorce."

"I could not talk about those days then . . ." his voice broke, he gulped down his drink and took a deep breath before continuing, "But now I can . . . suddenly some men emerged out of the bushes and stood in our way. Young Zalman Winter, who was driving us, stopped the cart and greeted them in Arabic - just to test them I suppose - then one of them aimed a gun at us and fired. I hid under the seat just behind Zalman who turned and stretched over to lift his rifle and began to return fire. Kalman Huck, our guard, who had been sitting beside me, had no time to lift and aim his rifle before Zalman was hit by their return fire. Zalman fell, his body covering mine. Apparently Kalman jumped from the cart, maybe to attack but was stabbed in the back and began to run to the kibbutz through the undergrowth, shouting for help.

My stepfather was then the kibbutz's military commander and he had already heard the shots and was on his way with backup. They found me unhurt but poor Zalman was on the doorstep of death. You know how sad, Zalman was just eighteen and on his way to join a much-needed course for welding, and the night before friends had made him a farewell party. He knew of the morning ride and had jokingly said to one of the girls that if he was killed she should lay a wreath on his grave."

Tears fell and he brushed them away as he said in a hoarse whisper, "I had to come back to be up here near him for Remembrance Day. You know I always remember that the I.D.F. taught me never to leave a wounded man on the field."