Israel is my “Over the Rainbow”, where dreams you dare to dream come true. Where bluebirds fly and there are so many opportunities to meet people, learn, and make a difference.

When I moved to Israel thirteen years ago, I never dreamt I would receive a press invitation for a media tour on the subject “Major Economic and Community Development in Upper Eastern Galilee”.

Ten years ago, via Facebook, I had the privilege of being in contact with Russell Robinson, CEO JNF- USA.  As a child, I remember JNF’s little blue and white box, in which we donated money to plant trees in Israel.  Like many of us living in Israel, I was not aware of their various projects to make Israel a better place to live, from the Arava in the south to Kiryat Shmona near the Lebanese border.

Our homeland, Israel, is known as a “Startup Nation”, with a very high percentage of hi-tech companies per capita. Most of its tech bustle is located in Tel Aviv, the nation’s business capital, and in other cities in central Israel like Herzliya, Raanana and Jerusalem.  Housing is very expensive, cities are crowded, there is heavy traffic, and a very metropolitan way of life.

Nevertheless, dreams do come true in Israel.  It takes people and organizations to bring landmark projects to life. One such organization, which in 1901 started buying land in Israel, is the Jewish National Fund. Also in the area are a world-renowned business and social entrepreneur, Erel Margalit and a child who grew up on a local moshav in the north, Chef Lior Lev Sercarz.

Mix the three together, loaded up with ideas, and add a local college, Tel-Hai, a young 33-year-old Kiryat Shmona mayor Avihai Stern and a doctor, Vivien Wong, from Kaneohe, Hawaii and you have visionary lay leaders who want to make a difference.

What a recipe to help transform the economy of the Greater Kiryat Shmona Region, while developing the area with a strong economic future and population growth.

“The plan to establish a technology center in the Galilee is based mainly on the developed food industry in the surrounding communities and on the desire to attract a young population to the region… Upper Eastern Galilee will be a region known as the ‘food basket’ of Israel… We are investing in technology, business management, cooking, restaurants, agricultural research and development, hospitality, and hotels,” said Russell Robinson, CEO JNF-USA.

As part of the change in this picturesque but remote region, Jewish National Fund-USA (JNF-USA) has partnered with ii2020, an Israeli NGO led by investor Erel Margalit, to focus on bringing food technology and innovation, business accelerators and incubators. To complement this exciting adventure, JNF is in the process of implementing a world-class Institute of Culinary Arts in the Upper Eastern Galilee at Kibbutz Gonen, which is just south of Kiryat Shmona, overlooking the Hula Valley.

“Since our founding in 1901, our single driving focus has been to ensure a strong, secure and prosperous Israel.  Jewish National Fund’s Go North initiative aims to double the population of the region. The strategic plan to attract new residents, while also retaining the current population, focuses on a combination of visionary programs and partnerships to boost the local economy while enhancing the quality of life in the community. Areas of focus include infrastructure development, housing, career training and employment services, parks and recreation sites, education and leadership building programs, tourism, and more,” according to the JNF website.

Combining education and taking advantage of local agriculture, the JNF International Institute of Culinary Arts has been created to provide students with the tools they need to innovate in the kitchen as well as the hospitality and business skills needed to run a restaurant - all in what has become a melting pot of the Middle East.  This is not simply a cooking school, but a Culinary Arts Institute.

Have you ever thought about eating cooked insects?  Innovation and creativity in food can mean anything to a new Culinary Arts Institute.  Being kosher is not difficult when following the laws of the Torah.

“When it comes to acceptable insects that are clearly written in the Bible: “you may eat of every flying creeping thing” - Leviticus 11:21. A quiet room became very lively when the audience was offered crisp cooked grasshoppers.  Most partook in the experience of a new food adventure. Crunchy grasshoppers have the texture of potato crisps and taste like health food.   Nicely stored in glass jars, they can become another source of food product. Even scientists are beginning to realize that a strictly biblical diet can be very healthy, according to Chabad.

“The Galilee is going through a tremendous transformation. For the past five years, we’ve been working with our partners to develop the region as a food-tech epicenter, and now we are starting to see results,” says Erel Margalit, a world-renowned business and social entrepreneur who developed a private-public partnership model to create tech-driven ecosystems throughout Israel. Six years in politics were enough for hi-tech veteran Erel Margalit. A year ago, he retired from the Knesset and from politics and returned to the offices of venture capital fund Jerusalem Venture Partners (JVP), which he founded with his partners.
“Israel has become a destination for food, adventure and culture,” affirms Chef Lior Sercarz. “The Institute of Culinary Arts will not only showcase the vibrant and fresh cuisine of Israel, but will also bring master chefs from across the globe to the school as visiting professors.”  Born in Israel, and served as a sergeant in the IDF, Sercarz is the chef and owner of La Boîte, a biscuits and spice shop in New York City. Lior is delighted to be returning home to Israel in order to serve as Director of the Institute.

Tel-Hai College will be involved in terms of academics and in the transformation of the region.  According to their website, the college was founded by the Upper Galilee Regional Council in 1957.  Over the past half century, it has grown and developed according to the changing needs of the region's population in the fields of higher education, learning and culture. Today, close to 7,000 full and part-time students are enrolled in Tel-Hai's various programs. The college, which employs approximately 500 academic faculty and administrative staff members, is the largest employer in the area and is considered to be the educational and cultural center for the entire northern part of Israel.

The International Culinary Institute plans to open in the winter of 2019, with recruitment of the inaugural cohort of students beginning soon.  Students of the school will have the unique opportunity to see the produce they use from seed to plate as much of the ingredients will be sourced from local kibbutzim and farms. Part of the training includes the business, accounting, customer service and hospitality sides of running a restaurant which the students will experience firsthand at the campus’s eatery.

“Together with our partners, we are creating a new story and narrative for the city and the region - a story that connects a city of entrepreneurship and a whole area of innovation,” says Kiryat Shmona Mayor Avihai Stern, working directly with Deputy Mayor and Head of Economic Development Ofir Yehezkeli. “The main goal is to create quality jobs for young people so that young families will choose to live in the area. We want to bring back to Kiryat Shmona and the Galilee our friends from childhood, high school friends, IDF and university friends and to attract young people and young couples from all over the country.  If we continue the way we are  today, we will no longer have to convince anyone to come to Kiryat Shmona - they will simply choose to come by themselves and then we will all know that our project has succeeded.”
Conventional medical services in Northern Israel lag behind those in the center of the country, hindering people from building their lives in the region. Plans are underway to improve the quality of healthcare, with Jewish National Fund leading the effort to upgrade and improve urgent care and to provide a medical clinic that offers X-ray services, nursing, a pharmacy, and more, to significantly improve the viability of the region as a comfortable place to live and visit.  Following the successful impact of its two other medical centers in Halutza and the Arava, JNF is planning to complete a regional medical facility that will provide essential care to the residents of the entire region.

I had the honor of meeting one of the visionary lay leaders who is working hard to see this dream become a reality. Dr. Vivien Wong, from Kaneohe, Hawaii, an evangelical Christian, who became involved with JNF after she came on a Christian trip to Israel, and later also on a JNF Doctors Trip.  This winter, she came for five weeks to work with medical professionals in the North.  She told me that after speaking with many locals, she felt she had given them hope that a much-needed medical center would happen and would no longer be a dream.

As a mother, I strongly believe the Eastern Upper Galilee will make an affordable and happy community for my children and grandchildren.  Israel is our “Home Over The Rainbow”.

For more information on Jewish National Fund, the International Institute of Culinary Arts, and other projects visit jnf.org or contact:  Eric Narrow enarrow@jnf.org 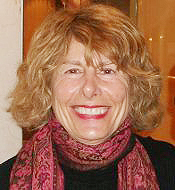 Since 2008, Andee Goldman has helped many Americans living in Israel to vote. She is an active volunteer for Overseas Vote Foundation, a 501(c)(3) nonprofit, nonpa...
More...