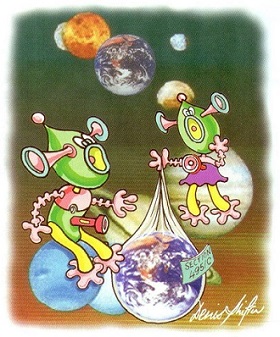 The search for extraterrestrial intelligence, using radio telescopes, has been going on for some time. It is probable that one day we will intercept communications between life forms very different from our own...

"Hey, how are you doing? Haven't seen you for a while."

"Yes, I just got back from the latest survey in Section 495/C. Nothing much there. Just one planet with what one might loosely describe as a form of life."

"Another one of those in the pre-development stage, eh?"

"Yeah, but weirder than most. The most advanced creatures do have a sort of brain, but tiny, only about one fortieth of overall body weight. And you cannot imagine what an inefficient operating system."

"No, just a variant on the old fuel energy model, but so primitive! It took a while for us to figure it out, simply because we never imagined that anything like this could evolve and actually survive. The system is based on regular inputs of fuel and a conversion mechanism that makes use of a small percentage of the fuel to generate the energy needed for the operation.  The rest of the fuel is just ejected and discarded. That's right, these creatures use most of their land and a high percentage of their total resources to produce this fuel (or 'food' as they call it}, and then they throw  away most of it."

"That's just the half of it. They are totally preoccupied with this 'food' thing. They spend most of their lives producing it, buying it, preparing it, consuming it, an discarding most of it. They worry constantly that they don't have enough, and yet their culture scorns those who consume too much and exceed average proportions. So some make a major effort to consume less, in order to reduce their body weight. Others need this 'food' desperately and are unable to get enough of it; they have difficulty producing the energy to survive but they are ignored by most of their fellows. Some invest a major part of their assets in so-called high quality versions of this 'food';  they then extract exactly the same elements required for energy as can be found in the cheapest varieties of 'food', and discard the rest just like everybody else."

"Doesn't make any sense to me."

"What is even more weird is how they all relate to this discarded fuel, what they call 'waste'. The fuel that they input is highly prized, savored, even cherished.  The 'waste' is totally rejected. The odor of the fuel enchants them, the odor of the 'waste' disgusts them. They invest even more resources in removing waste from their sight, conveying it far from their dwelling places and hiding it or destroying it. No recycling, no concept of alternative use, they are just desperate to get rid of it. And even worse, it seems that this waste can poison an important component of the fuel they need, what they call 'water'. Yet  they do not always adequately separate the processes of waste removal from the supply of the 'water'. We didn't finish analyzing exactly why this 'water' is so important to them, but if they are indeed dependant on it, how's that for self-destructive activity."

"I suppose you cannot expect much more from a species whose brain is so small. Can we estimate for how long they have existed like this?"

"As far as we can judge, only for a few hundred thousand of their sun-years. They will inevitably die out the same way we have seen it happen in all other pre-development societies, and then the question is whether intelligent development will be able to evolve in the environment that his species leaves behind."

"Care for another watt of sunlight before you go?"

"No thanks, I'm invited to a bar mitzvah just past the constellation of Orion and I must be on my way..."