Wonders of the Galilee

We’ve got you covered ... at the Strauss Factory

We recently spent three days in the beautiful green and rolling hills of the Galilee, on a tour organized by Val Kantor. The tour gave us the opportunity to experience many of the wonders of Israeli creativity and ingenuity, and to see how they have been used to benefit the country and its people.

We drove to the Galilee via the Jordan Valley with a visit to Kibbutz Sde Eliyahu, a religious kibbutz south of Beit Shean, which has a number of ecological industries. BioBee Biological Systems is one of the leading international companies in the field of biologically based integrated pest management, natural pollination, and medfly control. The kibbutz also has one of the largest spice companies in the Middle East, developing, producing and marketing spices and dehydrated herbs around the world. Retired donkeys graze between the palm trees which keeps the weeds down and fertilizes the ground; barn owls hunt the rodents at night, while kestrels do it by day which keeps the crops pest-free in an ecological manner.

From there we drove to Kfar Ruppin. 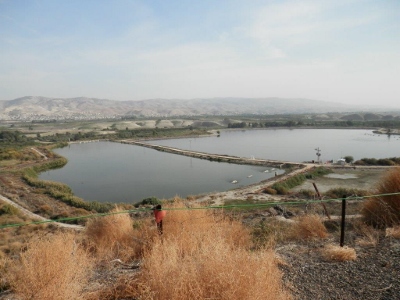 The area is known for bird watching due to its location on one of the most important bird migration paths between Europe and Africa. A bird ringing station is also located there. The kibbutz cultural hall, built in 1965 on a hill near the original tower and stockade structures, is being converted into a bird watching observatory and research center.

We walked to the military stronghold built to protect the kibbutz from 1967 to 1970, when the kibbutz was constantly shelled from across the Jordan River by Palestinian militants who also laid mines and harassed the kibbutz with small arms fire. During those years, the children had to sleep in crowded shelters. In 1970, King Hussein clamped down on the militants, but only since the peace treaty was signed in 1995 has the border been quiet.

After lunch at the ancient city of Beit Shean, we drove north, enjoying a spectacular sunset as we wound past the Kinneret and into the hills of the Upper Galilee, ending at the beautiful Hacienda Hotel in Maalot-Tarshicha.

Our second day started with a walk in the gardens of the hotel, and by 9.30 am we were on the road to Rosh Pina, founded in 1882. We walked along the cobbled streets of the old town to the home of Yigal Alon’s grandmother whose parents had owned the hotel opposite the synagogue. The early settlers had a very difficult time until they got help from Baron de Rothschild. We walked back to the bus through the beautiful Rothschild gardens.

Next stop was Kibbutz Dan, where since 1946 members have specialized in trout farming. The Dan river water is 15 degrees C and trout need to live in water at 13 degrees in order to reproduce, so they import millions of fertilized eggs from Seattle, USA, a few times a year, of which only half survive. We saw tanks of 10,000 baby trout, each about 5 cm long, which take a year to bring to market. Every year some 500 tons of trout are raised, providing for over 90% of the demand for trout in Israel. With the arrival in Israel in the 1990s of the Russian immigrants who were potential customers for caviar, the kibbutz imported fertilized sturgeon eggs and also developed this industry, which has been so successful that they now export to Russia, Europe and America. Kibbutz members are expert in their fish industry. Swimming in the aquarium with the goldfish are the odd-looking baby sturgeon. The caviar is harvested from seven-year old female sturgeons. This is an industry which brings in thousands of dollars.

After lunch at Kibbutz Snir we travelled to the Hula Nature Reserve. From our camouflaged cart we enjoyed the wondrous display of hundreds of cranes flying overhead and then resting on the lake for the night – the stars of the show always arriving on time, unpaid and with no prima donnas!

There were also pelicans, cormorants and egrets. Some even remain in the reserve all year, knowing that they can find an abundance of food there. To protect the produce of the farmers in Israel, extra food (such as corn and chickpeas) is added to the lake to keep them there.

This was followed by a night-time drive back to the hotel where, after dinner, we were entertained by a singer who remembered every one of our names, calling out to us in between his singing.

On our last day, after a hearty breakfast we were on our way, learning about the history of Ma’alot-Tarshiha and driving through the town. Then we drove through Kfar Vradim and heard about the wonderful work of Steff Wertheimer and his contribution to helping young start-up company entrepreneurs. This area has lots of Druze villages. Many of the young Druze men are conscripted into our army.  Whilst we were at an observation point, a car stopped and the driver called out, “Don’t just come and visit; send your children and grandchildren to come and settle in the Galilee”. Our driver, Ramsis, a local Druze who had lost a son in one of our conflicts, said he knew the gentleman, a Druze, who was a retired Mossadnik.

It was olive harvest time and en route we saw a man beating the branches of an olive tree, causing the olives to fall on the ground on a covering while a woman collected and sorted the olives. Then we went into a working olive press where we saw huge round stones revolving and crushing the olives. The crushed olives were then put on woven straw mats in layers and pressed to extract the oil. All the equipment was electrically operated. We even bought fresh olive oil. Ramsis’ wife brought us a flask of delicious Turkish coffee.

We next visited the Haifa Oil Refinery’s state-of-the-art Visitors’ Center, with its ecological garden and koi fishponds which opened six months ago in a no-longer-used cooling chimney. Two charming chemical engineering students guided us through the “smart” table, showing all the products made from “black gold” – crude oil – sports shoes, roller blades, helmets, surf boards, toys, medicine, clothing, cosmetics, and so much more. In fact, a great deal of what we use in everyday life is made from crude oil – mind boggling!  We saw a movie on how the cooling system had worked in the chimneys, but these days there are more efficient methods.

In a simulated control room with rows of computer screens we were shown how the engineers oversee and control the plant; how the different heating temperatures distill the properties extracted from the crude oil, and also how they keep the pollution down to a minimum, as they are continually checked by government inspectors. We saw a 3D movie showing the creation of oil billions of years ago and the discovery of oil. The crude oil comes to Israel from a central collecting base in Azerbaijan on the Caspian Sea.

The refinery was built by the British in 1938, and in 1959 it was transferred to the Israeli government. It is now owned by a private company, the Bazan Group.  They have spent 90 million shekels on cleaning up the Kishon River and have brought in fish. We saw birds hovering over the river bringing it back to life.

A visit to the Strauss factory was an absolute joy. We first went into the tasting room and were seated around an oblong table with a narrow pink conveyer belt filled with delicious Strauss products for us to enjoy as much as we wanted. Reluctantly leaving some uneaten, we put on protective head and body coverings and went into a spotlessly clean passage. After disinfecting our hands, we saw how the little tubs were made, filled, sealed and cut into four and then sent into the control room where each batch was quality inspected and tasted before being sent out to the markets. More than 90% of their products are for local consumption because of their short expiry date. Strauss sold their ice cream branch to Unilever and have merged with Yotvata on a 50-50 basis.

We had lunch at Kibbutz Beit HaEmek and then made our long way home, very happy, having had three glorious, exciting and informative days.