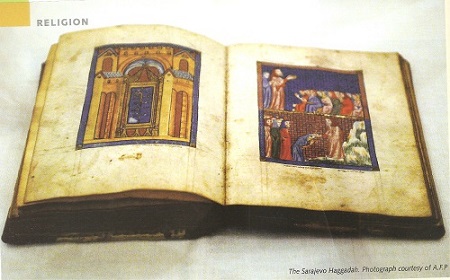 The haggadot, perhaps more than any other book in Judaism, gives us a direct connection to our ancestors, almost as if we have a collective memory of our struggle to throw off the bonds of slavery and reach our promised land.

It is believed that the first Haggadah was assembled during the Second Temple period in Jerusalem and the earliest existing Haggadah appeared in a 10th century Babylonian prayer book. The first printed version of the Haggadah was published in Guadalajara in 1482, a decade before the expulsion of the Jews from Spain.

Probably the oldest surviving  Ashkenazi  Haggadah is the one copied by  a scribe named Menahem in the late 13th century. What is interesting about this book is that most of the humans are depicted with birds' heads, blank faces, or heads covered by helmets. The theory is that these distortions were to comply with the prohibition on reproducing human images, although most medieval Haggadah illustrations did not strictly adhere to this rule. The last of the great early printed Haggadot was the Amsterdam Haggadah printed in 1695. Abraham Ben Jacob, the artist, a former Christian clergyman who converted to Judaism, borrowed most of the illustrations from a famous Christian artist, Mathaeus Merian of Basel, who illustrated bibles and history books. While Ben Jacob altered many of these illustrations for Jewish audiences, they were so popular with the Jews of Europe that they have been used in Haggadot well into the 21st century.

The oldest Sephardic Haggadah in the world is the Sarajevo Haggadah which originated in Barcelona around 1350. This Haggadah is handwritten on calfskin and illuminated in copper and gold and is considered to be one of the most beautiful and most valuable in existence. It is believed to have been taken from Spain by Jews who were expelled during the inquisition in 1492 and then discovered in Italy in the 1500s. It was then sold to the National Museum in Sarajevo in 1894. During World War II the director of the museum risked his life by hiding the manuscript from the Nazis, later smuggling it out to a Muslim cleric who kept it safely hidden under the floorboards. The manuscript was hidden in an underground bank vault while Sarajevo was under siege by Bosnian Serb forces. It was rumored that the government had sold the Haggadah in order to buy weapons, and in order to refute the allegations, the President of Bosnia produced the Haggadah at a community seder in 1995. Restoration of the manuscript in 2002 was funded jointly by the United Nations  and the Bosnian Jewish community and is now on display at the National Museum of Bosnia and Herzegovina in Sarajevo.

When the Jews fled Spain during the inquisition in 1492 they took with them their traditional language, Ladino, and today there can still be found Haggadot printed in Hebrew with Ladino translations.

With over 2,000 Haggodot, Aviram Paz, living on a kibbutz in the Jezreel Valley, has one of the world's largest collections. Included in this collection are Haggadot used by survivors of the Holocaust. One such Haggadah was given to Aviram by a Holocaust survivor - she had used the Haggadah during a secret seder in Theresienstadt. In 1946 in the displaced persons' camp in Landsberg in the vicinity of Munich, a Haggadah was handwritten in Yiddish by a survivor of the Dachau concentration camp. Interwoven in the Passover story were some of his own experiences in Dachau.  Fifteen copies were duplicated on a hectograph (a gelatin duplicating machine), the last few being so faint that some of the words had to be rewritten in ink. It is possible that the copy in Aviram's collection is the only one still in existence.

While we read in the Haggadah of our struggle to throw off the yoke of slavery in Egypt, many of us have the more recent memories of our struggle for freedom and survival. There are today over 3,000 different types of Passover Haggadot, as varied and diverse as the people of Israel, but as Jews around the world sit down at the seder table and start to read the Haggadah, in spirit we are again as one people making that Exodus from Egypt.

Miriam van Bers was born in Vienna soon after the Anschluss in 1938.  Fortunately, when she was a few weeks old, her parents managed to flee to England. Miriam grew up in England, but, in her ...
More...