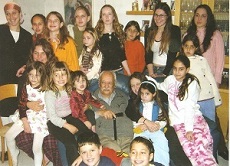 Harry Berman, who died just before his 97th birthday, in the photograph with 19 of his 21 great grandchildren. They all adored him and would visit him often and play with him klabbijas, which he taught them, and drafts. Born in 1909 in Kedan, Lithuania, the family immigrated to Cubaq in 1922, and later to South Africa. Harry and his wife, Sonia, came on aliyah in 1965, lived in Givatayim and in 1998 moved to Raanana. He is survived by his children, Les Berman, Ray Mandel and Debbie Velikson, 8 grandchildren and 21 great grandchildren, all of whom live in Israel.

Hertzel Katz was born in South Africa 77 years ago where experiencing anti Semitism first hand led to his interest in Zionism, he came on Alyah in 1969 with his wife Lola and 2 young children. Q...
More...