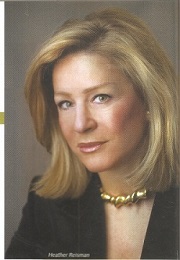 Google "Heather Reisman" and you come up with an impressive list of facts. Born in Montreal in 1948 and educated at McGill University, she is a former Governor of McGill and the Toronto Stock Exchange. At the age of thirty-one she co-founded Paradigm, the world's first strategic change consultancy, and acted as its managing director for 16 years. She went on to become President of Cott Corporation, overseeing its development from a regional bottling company to the world's largest retailer-branded beverage supplier. In 1966 Reisman launched Indigo Books and Music Inc. which today boasts 90 Indigo and Chapters super-stores and 160 Coles stores throughout Canada, as well as www.indigo.ca, the leading Canadian online book retailer.

In addition she is a director and officer of Mount Sinai Hospital and serves on several boards, including that of Onex Corporation, whose CEO, Gerald Schwartz, is her husband. Together the couple funds a string of educational and medical projects in Israel, including international exchange programs of pediatricians and computer scientists. They also sponsor a Chair in the Tel Aviv University School of Business. Reisman's resume is piled high with professional coups: Harvard University wrote two case studies focusing on the growth of a company under her leadership. She recently received an Honorary Doctorate in Business from Canada's Ryerson University. Along the way Reisman raised four children, and is the devoted granny of seven grandchildren.

What Wikipedia does not say is that Heather Reisman is film-star beautiful. Nor that she responds to emails within nano-seconds. Nor that every year she and her husband "adopt" another 100 children and provide them with an education and living expenses. HESEG (achievement in Hebrew), the foundation set up by Reisman and Schwartz to set ex-Israeli soldiers up for success, was dreamed up during a stroll around Athens in 2004. It was the height of both the Olympics and the intifada. "We had heard that there was a threat of terrorism in Greece at the time," recalls Reisman, "and we enlisted two Israeli ex-General Security Services (GSS) men to accompany us on our boat. While chatting to one of them we mentioned that we really wanted to do something meaningful for Israel. He told us that at any given time there are over 5,000 "lone soldiers" in the army; boys and girls who make aliyah without their families. Each year about 1,500 of them finish their service. Then they need to start worrying about accommodation, food, studying; all without parents around to help. Many of them are forced to leave the country. Neither Reisman nor her husband had ever before heard of lone soldiers; they decided to investigate. Schwartz approached Brig. General Benny Zucker, the head of Tel Nof Air Force Base. "Of course I know about lone soldiers," said Zucker.  "I was one of them." The Reisman-Schwartz team swung into action A 12-person advisory board was set up, chaired by Itamar Rabinovitch, president of Tel Aviv University and formerly Israel's ambassador to Washington. The board is made up of prominent public figures from all walks of life and includes an ex-head of the Mossad and a lieutenant colonel who heads the IDF's sniper school - a lone soldier himself, the son of an Orthodox rabbi who moved to Israel from California 16 years ago, against the wishes of his family.

A few months later HESEG was launched, at a ceremony at the Sde Dov Air Base. Along with 170 lone soldiers, the IDF Chief of Staff, the Chief of the Air Force, Defence Minister, and many other dignitaries was Matan, the GSS agent who had suggested the project walking along the waterfront in Athens. Also present was a young soldier from Philadelphia, proudly displaying his newly acquired paratrooper wings. At the end of the ceremony he ran onto the stage, embraced Gerry Schwartz, and pinned his wings onto Schwartz's sleeve. "You deserve these as much as I do," he said, and added: "I haven't finished the army yet, but when I do I will apply to be a Heseg scholar... I promise, you'll see me again." That young soldier was Michael Levy, one of the first boys to be killed in the second Lebanon war.

The war galvanized Schwartz and Reisman into even greater action. HESEG volunteers were given $ 100,000 to buy all the toys they could find, and deliver them to children under attack in the North. The money also paid for air-conditioners to ease conditions in the sweltering heat of the shelters. The students took the volunteering in their stride - the conditions of a grant commit each scholar to 20 hours of volunteering a month, as well as studying hard and aiming to stay in Israel. Once the students graduate HESEG helps them with one last  gift - "just as if they were our own children," says Reisman - a grant  to help towards an apartment or a car. "We want our students to succeed," she explains, "and we hope they will create a leadership base to make a difference. They are wonderful people, such committed Zionists that they have left their homes and families to come and serve in the Israeli army. We are happy to be able to help them.

Not everyone is as happy. Last year, on the Saturday before Christmas, activists of "The Coalition Against Israeli Apartheid" organized a picket outside Chapters and Indigo bookstores in Toronto and Montreal. They were demonstrating against Reisman's support of former soldiers of the Israeli army and her part in "perpetuating the apartheid Zionist state." Reisman, who also refuses to stock Mein Kampf or The Protocols of Zion (and bans from her stores child pornography, books on making weapons of mass destruction, and literature that promotes the annihilation of people), feels that the principles she stands for are worth these small reactions.

This year HESEG is accepting applications for its third intake of scholars, any lone soldier may apply. All applicants are scrutinized by the board, which looks for outstanding youngsters who are motivated to infuse the country with a spirit of excellence. This year's intake will join the 200 ex-lone soldiers from all over the world including Russians, Ethiopians, French, and North and South Americans, who already enjoy the privileges of being HESEG scholars. At its peak, the foundation is expected to donate $3 million per year - and the fund is set up to "last forever." Plans include the construction of a HESEG building in Tel Aviv to cope with the growing number of scholars, who remain part of the family even after they finish school. With her family multiplying at such a rapid rate, Reisman may be hard pushed to reply to all her emails at the same rate as she does today. She'll probably come up with a solution.

Dr. Pamela Peled was born in South Africa and came to live in Israel in 1975, at the age of 17. She studied English Literature and Teaching at the Hebrew University in Jerusalem and has a doctorate...
More...