Send In The Clowns

Clowns have been around for millennia. 5000 years ago pygmies, dressed in animal skins and masks, danced to amuse the Pharaohs. The Chinese Emperor, who built the Great Wall, had his own personal clown attached to the Imperial Court. The Greeks put them in short tunics padded with huge grotesque phalluses strapped to their loins. The Romans had mime artists grimacing and pulling faces and others named ‘Stupidus’ (no prizes for guessing his speciality), Scurra (scurrilous) and Moriones (moron).

In the Middle Ages it was customary for grand houses and courts to maintain fools. They were well treated, being considered endowed with special powers from the gods. They served royalty as court jesters with the right of free speech at a time when this was not permitted for the mass of the population.

The jester to King Edward IV in 1400’s was, unusually, an Oxford don. His maxim was “a merry heart doth good, like a medicine” – an adage echoed in many cultures. Earlier, In 1123 Rahere a courtier and jester to Henry I, became ill on a pilgrimage to Rome. He vowed that should he recover he would build a hospital for the poor to honor St Bartholomew. He survived. The hospital – Barts – has been one of London’s leading hospitals ever since.

Today’s clowns however, do not derive from this courtly heritage but rather from street performers. Professional improvised comedy known as Commedia Del Arte began in Italy at the time of the Renaissance. Harlequin, the central character, would chastise adversaries with his magical bat – his ‘slapstick’. It was also at this time that the word ‘clown’ entered our vocabulary.The first instance being in Shakespeare’s Hamlet.

As circuses became popular centers of entertainment, clowns performed both there and in theaters – several becoming world famous such as the English actor, dancer and comedian Joseph Grimaldi (b.1778) and Charlie Cairoli (b.1910) – an English-Italian musician and impressionist. There were many others and the silent movie era heralded a host of talented clowns including Charlie Chaplin, Harold Lloyd and Laurel and Hardy. 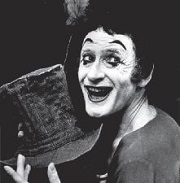 I guess that clowning was never really considered a suitable job for a ‘nice Jewish boy’, but we do have a couple of co-religionists in this field of whom we can be justly proud. Marcel Marceau, a Frenchman (b.1923) whose father died in Auschwitz, went into hiding during WW2 working for the French Resistance. He first began using mime to keep Jewish children quiet whilst helping them to escape to Switzerland. In 1988, he was awarded the Legion d’Honneur, and the Order of Merit in France. He was an elected member of the Academy of Fine Arts, Berlin, and declared a ‘National Treasure’ in Japan.

Happily my research also led me to Avner the Eccentric (Avner Eisenberg b.1948),hailed as one of the greatest clowns of all times in the US. I watched as many of his YouTube videos as I could find and he really is a great performer – hugely talented and very funny.

His extensive and varied career has included hypnotherapy, developing silent theater skills as a therapeutic tool and much more. He also sits on the Board of Directors of a synagogue in Portland, Maine. Having read about synagogue politics recently, it seems to me highly appropriate to have a clown perform such a function.

The medical profession has long recognized the value of art and music therapy to alleviate the anxiety of patients in hospitals, but in recent years this has taken a new form – medical clowning. It began in the 1970’s, inspired by Patch Adams, an American physician, social activist, clown, and author (featured in the film starring Robin Williams).

In Israel too an entirely new breed of clowns have professionalized ‘clown therapy’, now developed into a research-backed healthcare discipline. In 2002 the Dream Doctors Project started at Hadassah Hospital, Ein Kerem. Courses were eventually set up to train clowns to become skilled paramedics integrated with the clinical teams.

Trainees must have a background in dramatic arts including acting, street theater and physical clowning. David Barashi (DuSH), whom I first met on his visit to London where he gave master-classes to English clowns, explained that clowning is a more complex process than acting as it requires the subtlety of non-verbal communication, body language and empathy as to how ‘the other’ may feel and react.

The clown develops this added dimension in order to decide whether to approach patients with gusto, or quietly and gently to gain their trust. Non-verbal communication is often more explicit than words, particularly useful in Israel where much of the population is a mix of peoples speaking many different languages.

Dream Doctors undergo five months of intensive training including theory and practical studies – expressive art therapy, psychology, nursing and medicine as well as physical clowning and acting. During an average year over 100 Dream Doctors, working in 29 hospitals, have contact with approximately 200,000 patients and work closely with physicians to assist with more than 40 medical procedures. 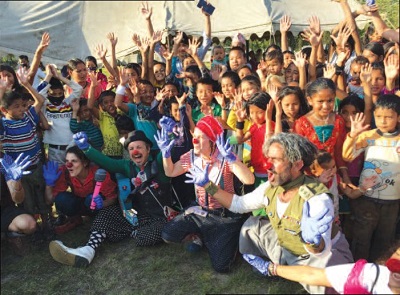 I visited Hadassah and followed DuSH around the wards. It was a truly moving experience to observe how sensitively he judged the state of mind of each patient to decide how best to be accepted by them. Everyone he encountered became at ease and was left smiling. After seeing him in action it was no surprise to learn the extent to which this work has had such an impact.

Research results demonstrate how the presence of a medical clown reduces anxiety in patients and their families. It can reduce pain, lessen the need for sedation in certain procedures and also alleviate depression. Surprisingly in vitro fertilization patients experiencing clown therapy immediately after implantation, are 40% more likely to become pregnant. Add to this the feel-good-factor experienced by the hospital staff themselves, who report on the changed atmosphere in their wards.

Little known is the fact that these dedicated Israeli clowns also work abroad in disaster zones including Thailand, Indonesia, Philippines, Angola, Ethiopia, China, Germany, Greece and the USA. In Haiti and Nepal they have worked longer term as an integral part of the IDF field hospitals.

For the clowns theirs is a hugely emotionally challenging vocation, one that at times can be joyous but at other times sad beyond belief when dealing with terminally ill children.

There can be no better gift in the world than love, giving it to someone and seeing a smile. This is even mentioned in the Talmud. Two men in the marketplace were approached by a rabbi who asked their occupation. “We are jesters who go about cheering up people who are sad,” at which the Prophet Elijah appeared and declared “They are truly worthy of the world to come”. 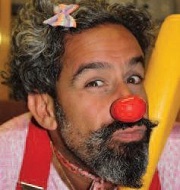 I leave you with the following quote from Daisy D. Dots – an American clown.

“A clown brings happiness where there is sadness, an ear to those who need to be heard, a tear when someone needs to be sad. Their clothes tell you that they are not ordinary, but people whose big shoes and red noses are small in comparison to the size of their hearts.   They make you feel you are the most special person in the room, giving of their heart to make you feel better…and somehow before you know it, it does.”

Ruth Corman’s latest book UNEXPECTED ISRAEL is available from bookstores in Israel, Gefen Publications and direct from Ruth if you want a signed edition at: ruth@cormanarts.com

Ruth Corman was born in Manchester, UK. As a mature student she gained an Honors degree in Sociology from Durham University. Today she divides her time between Jerusalem and London where she works ...
More...