A bit of humor 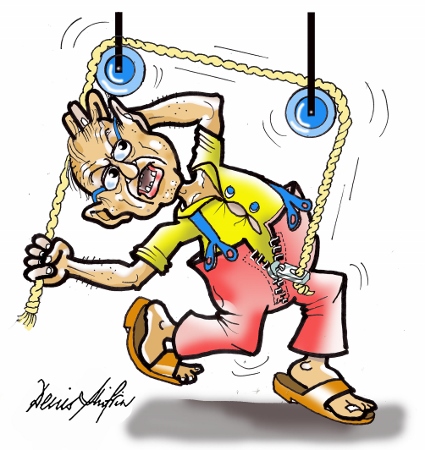 Ah, Passover is over…
An old Jewish man stopped before a blind fellow begging for handouts.
"I won't give you money, but I'll give you this," he said, handing the sightless man a piece of matza.
The beggar ran his hands over the surface and frowned. "Who in the heck," he exclaimed, "wrote this crap?"

An old man who was nearly deaf decided a hearing aid was too expensive. Instead, he wrapped an ordinary piece of wire around his ear."Ben," a friend shouted, "how can that piece of wire possibly help you?"
"It made you talk louder, didn't it?"

Two hillbillies walked toward each other on a country road. One carried a burlap bag over his shoulder. "Hey Rufus," Billy Bob drawled, "what's in the bag?"
"Chickens," was the reply.
"If I guess how many, kin I have one?"
"You kin have both of 'em."
"OK," Billy Bob said. "Five?"

The hopeful suitor finally gathered the courage to ask his girlfriend's father for permission to marry. The cranky old man frowned as his daughter's sweetheart entered the study. "Sir," the nervous young man began, "I know that Rivka can't cook or clean. I know that money slips through her fingers. I know that sometimes she talks too much. I know that she can be really cantankerous. "Still," he concluded, "I love her and want to marry her despite all her faults."
The father glared. "What faults?"

Jewish grandma
A Jewish grandma and her grandson are at the beach. He's playing in the water, she is standing on the shore not wanting to get her feet wet when all of a sudden a huge wave appears from nowhere and crashes directly onto the spot where the boy is wading. The water recedes and the boy is no longer there... he was swept away. The grandma holds her hands to the sky, screams and cries: "How could you do this? Haven't I been a wonderful grandmother? Haven't I been a wonderful mother? Haven't I kept a kosher home? Haven't I given to charity? Haven't I lit candles every Friday night? Haven't I tried my very best to live a life that you would be proud of?" A voice booms from the sky, "All right already!" A moment later another huge wave appears out of nowhere and crashes on the beach. As the water recedes, the boy is standing there. He is smiling and splashing around as if nothing had ever happened. The voice booms again. "I have returned your grandson. Now are you satisfied?"
She responds, “He had a hat."

An elderly man in Louisiana had owned a large farm for several years. He had a large pond in the back. It was properly shaped for swimming, so he fixed it up nicely with picnic tables, horseshoe courts, and some apple and peach trees. One evening the old farmer decided to go down to the pond, as he hadn't been there for a while, and look it over. He grabbed a five-gallon bucket to bring back some fruit. As he neared the pond, he heard voices shouting and laughing with glee. When he came closer, he saw it was a bunch of young women skinny-dipping in his pond. He made the women aware of his presence and they all went to the deep end. One of the women shouted to him, “We're not coming out until you leave!” The old man frowned, “I didn't come down here to watch you ladies swim naked or make you get out of the pond naked.”
Holding the bucket up he said, “I'm here to feed the alligator...”
Some old men can still think fast.

While I sat in the reception area of my doctor's office, a woman rolled an elderly man in a wheelchair into the room. As she approached the receptionist's desk, the man sat there, alone and silent. Just as I was thinking I should make small talk with him, a little boy slipped off his mother's lap and walked over to the wheelchair. Placing his hand on the man's, he said, "I know how you feel. My mom makes me ride in the stroller too."