the realization of the impossible dream

ON SUNDAY, November 14, 2004 our party of 12 hikers and our guide, Reuven excitedly set out from Kibbutz Dan on the first leg of Herman Musikanth’s dream of hiking the Israel National Trail - a hiking trail which links the northern and southernmost points of our country - a distance of 420 kms as the crow flies, but which was designed to include as many unspoiled forests, nature areas and scenic views as possible and extends over a distance of more than 900 kms. This first leg was planned for 5 days but as it turned out the 5th day’s walk up Mount Meron was wisely postponed by our guide as heavy rains during the night would have made the route with it’s steep ascents and descents unsafe. This section was completed two weeks later and it was well worth getting up at 4a.m. to do so.

On day 2 of the hike we stopped to drink a wine toast to Hymie Goldblatt, our most senior participant, in celebration of his 81st birthday (the rest of the party ranged in age from 55 to 75). Israeli TV’s Channel 2 was on hand to photograph this event as was the hiking group’s Herman (the impossible dreamer), Hymie Josman, my husband Henry, Monty Hilkowitz, Les Wende, Len and Ros Israelstam, Jack Rabinowitz, David Patchik, our affable guide Reuven and myself. Some of you may have seen this aired on TV that evening. Our experience of these first five days appeared in an article printed in the Esra Magazine (Feb/March 2005) entitled “To dream the impossible dream”.

I quote from the final paragraph of the article: “These 75 kms of physically challenging terrain proved to be exhilarating, enjoyable and an invigorating experience. We are all looking forward to hiking the next portions of the trail scheduled for early February and late March (2005) and then subsequent hikes till we hopefully arrive in Eilat - the fulfillment of the impossible dream”, which, I am happy to say, we achieved on March 21, 2007.

The composition of the group basically remained the same throughout though three participants, for health and personal reasons, fell out during the course of time. Some time later we were joined by Alfie Feinberg, the third medic in the group. We had casual hikers join us from time to time, including three visitors from England. The subsequent hikes were anything from two to four days duration. 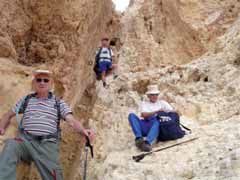 We always started walking in the mornings at the endpoint of the previous day’s hike - or the endpoint of the last day walked on the previous hike some weeks before. As we sometimes had to travel up to three quarters of an hour to our starting point and as we wanted to start our day’s hiking by 7am or earlier, it always meant we had to be up and by 5am eat breakfast, assemble food for consumption during the day and pack a couple of liters of water into our backpacks; which were loaded into the back of the combi (and an extra vehicle if necessary) before we piled in ready to depart to our starting point. We were fetched, albeit not in the same physical condition, at the end of the day’s hike.

The logistics of all this must be boggling your mind, as indeed the enterprise and organizational skills of Herman’s wife, Daphne, boggled our minds - finding accommodation - sometimes for as many as 18 people, the provision and transport of food supplies, setting out the breakfasts and our provisions for the day, catering for evening meals (ably assisted by nonhiking wives and Daphne’s sister, Myrna, who early on became a member of the group, providing additional transport). Daphne shopped, cooked and catered, besides discussing the logistics for the following day with Reuven - needless to say that she was an expert in reading road maps and an excellent driver to boot - a wonder woman without whom, I make so bold to say, Herman’s dream could not have been achieved.

We continued in the north and for the following months covered the Upper and Lower Galilee, sleeping at Moshav Arbel and Moshav Tsipori, where we even managed a visit to the National Park after a day’s hike. We hiked and climbed in rain and shine - climbing Mount Arbel, where conditions were so muddy that it made walking difficult. We went up and down Mount Tabor and on the same day we walked up to Mount Yona in Nazareth, through Arab and Druse villages. In fact on “Land Day” we walked peacefully through the Arab village of Mashad.

The beauty of the Galilee was a joy to behold. Then four days hiking in the Carmel, then three days along the coast, then inland through Ben Shemen, Latrun and the Burma Road. I wasn’t present at the time, but one of the most memorable moments of the hike, I’m told, was the meeting with three young girls at this point who recalled the history of the Burma Road in the song “Bab el Wad”, and whose rendering brought tears to the eyes of the hikers.

We continued through the Jerusalem hills, spending nights at Shoresh, then Tsora, Beersheva and Arad. Then into the Negev desert - the small Machtesh, where sliding down on behinds seemed the safest way. We well remember the ladder of Maale Palmach where the only way the Palmach could negotiate the formidable cliff was to construct a ladder, for which they used their guns to make the cross bars. Today there is a more substantial ladder, but it was still daunting to negotiate, as indeed were other rickety ladders and ropes which enabled us to climb down into and up out of gorges. It was certainly for the fit, and not for the faint-hearted! Then large Machtesh, with nights spent at Mashabei Sade and Mitzpe Ramon.

On three unforgettable occasions we slept in the Negev Desert in sleeping bags in pup tents, which could be accessed only by crawling on all fours - a far cry from the accommodation we, in our senior years, are accustomed to, even with the luxury of a three-inch mattress between the ground and ourselves! The tents, which we were required to erect ourselves, were provided by a company who, also supplied the evening meal, breakfast the following day and provisions for that day’s hiking. On one occasion, problems with their vehicle (only 4x4s can gain access) delayed them for two hours which left us waiting in extreme cold in the middle of nowhere. Fortunately we were able to get a fire going. In contrast, our hearts were greatly warmed by the exceptional friendliness and hospitality we received from all our hosts at the kibbutzim, moshavim, and b+bs at which we slept. In the Arava we slept nights at Ein Yahav, Lotan and Elifaz.

Our final nights were spent at Kibbutz Eilot, just 3 kilometers from Eilat, from where we commuted each of the following three mornings to the starting point of our day’s walk at the conclusion of the final 40 kilometers of the Israel Trail. The last three days of hiking covering those 40 kilometers was not easy because the terrain was mountainous, but the rock formations, the colors and the scenery were stunning. We were all excited to be within reach of our destination of Taba - which we eventually reached at 4p.m. on Wednesday, March 21, 2007, two years and five months after setting out, 58 hiking days and 900 kilometers later. We were all two years and five months older and all grateful to our knowledgeable guide, Reuven, who brought us back safe and sound and who, throughout the course of the trail regaled us with facts of history and biblical connections with anecdotes and legends and with information about the flora and fauna. A truly wonderful guide.

We arrived to a resounding welcome from family and friends and Channel 2 TV. Fonda Dubb, an active Esra member in Eilat, arranged for members of Yealim community center to welcome us with red roses. Together with Avi Cohen, the director of the Eilat Town Council, they waited for an hour for our arrival, during which time Colin Porter entertained on his guitar. We were feted with champagne and wonderful eats. The celebration was made complete, with the arrival of Herman Musikanth who was all smiles despite his bandaged head and swollen face. He had caused us much consternation earlier in the day when he sustained a head injury. Fortunately an IDF paramedic came hiking by and he summoned help from the army. Herman was airlifted out of the mountains by helicopter to Soroka hospital in Beersheva. No wonder Herman was greeted with such applause on his arrival. In his interview with a TV reporter he commented: “I was looking forward to arriving in Eilat...but not this way!”

The day ended with an unforgettable celebratory dinner at Kibbutz Eilot at which everyone, hikers and guests alike, came attired in a specially designed Tshirt bearing the name of our group “Hajajeyah Hikers”, which means undulating in Arabic. The dinner and reunion some weeks later, which included the four hikers who were unfortunately not able to participate in the last hike, was the finale to the realization of the impossible dream - a never-to-be-forgotten hiking experience for all of us and an experience in camraderie, friendship and concern for one another. A highlight, I would venture to say, in all our lives. We now look forward to walking a 140 kilometer. long trail from Mount Hermon in the north to Ein Tawfiq in the south - a new trail which seeks to let hikers meet the “real Golan”.