Success for the team in Germany

The team of 26 girls, ages 9-18, was the only team from Israel at the contest. Of the 350 competitors from nine countries around the world, the Israeli team won more gold and silver medals than any other participating country.

Among the medal winners was a trio in the youth age group, comprising two 14-year old girls, Rotem Birav and Noa Leon, and 8-year old Romi Prital Ozeri. They came in 2nd in the semi-final, and won a silver medal in the finals.

Snunit Acrobatics was founded 20 years ago by Ruti Zohar of Maccabim, and is one of the top teams in Israel competing in the sport of "pyramid acrobatics".

The teams must compete six times a year to qualify for the Israeli championship and International criterion. The trio (Lia Baberski (11), Romi Hanin (16) and Anat Hurvitz (16), who came in 1st place in their age group in Germany,  will compete in the Europe Championship in Poland.

As a toddler Romi was a very active girl and would enjoy jumping around her parents, Oshrat and Itamar. They noticed that Romi’s joints were very flexible, so when she was five, they sent her to a weekly acrobatics class. She was spotted by Ruti Zohar and by the time she was 6-years she was already part of a team at Snunit competing in the Israeli league in the pair division.

Snunit's head trainer is Ala Shatilov, a champion in her own right in the FSU, before making aliyah twelve years ago. She is the mother of Israeli Olympic floor gymnast Alex Shatilov, who won a bronze medal in Baku recently and has also competed in the last three Olympics.

The intricate choreography is composed by Rotem Peled, a 3-time Israel champion and today  is head coach and lead choreograher.

Romi’s very proud great grandmother, Harriet Maddy is 94 years old, has a close family of 2 children, 5 grandchildren, and 7 great grandchildren. Her parents reached the U.S. before World War 1 and settled in Syracuse, New York. Her mother was an active Zionist, and this has passed down through the generations. All her family live in Israel. She followed her daughter, Tzippy, and son, Bruce, making aliyah in 1985, and settling in Raanana.

Harriet feels that the great accomplishment of an Israeli team gaining success in Germany, exactly at the time of Israel’s National Holocaust Memorial Day, April 24, 2017, is even more proof of Jewish ongoing survival and continuation after the Holocaust. 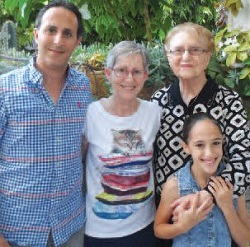 Four generations of the Maddy-Ozeri family

Oshrat prital ozeri
2017-07-18
We are so proud of Romi and all the team for such great accomplishments! Good job!