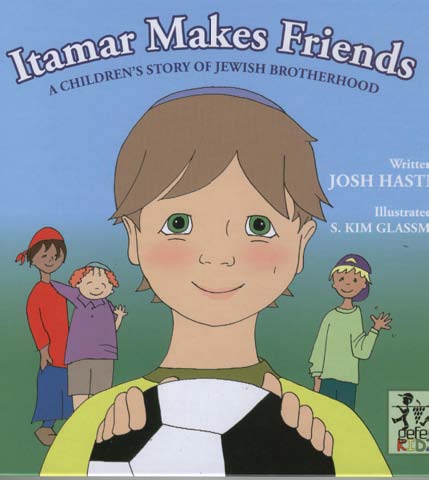 When my son, now a Rabbi in Kadima, was in second grade, he heard two boys bouncing the basketball which had fallen off the back of his bicycle as he was making a turn around the corner. He swerved his bike around to face two kippa-wearing boys, "Excuse me, that's my basketball you're playing with." "It was your basketball," said the older of the two boys. "Now it's ours." In telling me the story shortly after it happened, my son said, "I knew I wanted two things: the basketball and not fighting to get it. So I said to them, 'How can religious boys behave this way?' The boys removed their kippot and said, 'We're not religious; we just came out of the cemetery to visit our grandfather's grave.'" My son then said to them, "Religious or non-religious, we're all Jews, and Jews don't behave this way to one another." He then invited them to play basketball with him at a nearby court, and although they declined the offer, they returned the ball saying, "You're a good kid."

Josh Hasten of Elazar has written Itamar Makes Friends, a children's story of baseless meanness, the uplifting quality of friendship and the common humanity of fellow Jews. Published in time for Rosh Hashanah, it tells the story of eight-year-old soccer-loving Itamar who lives in a settlement and who encounters the prejudice of the city kids when he visits his cousins there. The concept of Teshuva (repentance) after the city kids realize how badly they behaved toward Itamar, leading them ultimately to become his friends, is a good message for the High Holidays, and indeed all year round.

An important element of the story is that all the children involved wear kippot.  The author is aware that people living in religious settlements, notably over the Green Line, are looked upon with distaste by many city folk. By presenting this situation as a children's story with a moral, he addresses the problem gently but succinctly, stressing that what we have in common is much more than what separates us.

The illustrations, by S. Kim Glassman, are lively and adorable, and if my five-year-old grandson is any judge of  successful children's literature, after having the story read to him three times, he tucked the book under his pillow at night so it would be the first thing he would read upon awakening.

Judy Shapiro's review of "Itamar Makes Friends" appeared in the December 29th issue of the Five Towns Jewish Times. The full issue can be viewed on the following site http://www.flipdocs.com/showbook.aspx?ID=10001763_812520 and the article can also be viewed online at http://www.5tjt.com/local-news/12814-itamar-makes-friends

I Shall Never Forget You
Robert Kwong at the Yeshiva