by Ruth Shakenovsky Category: Environment Issue No. 186
In memory of bird lover Max Patz,  the Max Patz self-guiding Trail has been established in the
Jerusalem Bird Observatory, a unique urban site by the Knesset. There are at present four
stations with more planned for the future.

The Jerusalem Bird Observatory, situated in the heart of Jerusalem in the precincts of the Knesset, formerly an open piece of ground, was founded in 1994 by local birdwatchers in order to protect this unique urban site, and funded by devoted volunteers, foundations and generous friends.

Today it is part of the Society for the Protection of Nature in Israel (S.P.N.I) and is its first community wild life center in the country, undertaking research and affording education to the many groups of schoolchildren and other visitors and focusing on the preservation of Jerusalem's wild life heritage.

The Max Patz Trail is a self-guided trail accessible to all smart phones via a series of bar codes. It was made possible by a generous donation from the Patz family in memory of my late brother-in-law Dr. Max Patz, a lifelong "birder" and a dedicated friend of the Jerusalem Bird Observatory.

Max, born in 1924 in Germiston, South Africa, moved to and grew up in Brakpan, a small mining town, where he attended primary school. Max can be described as a "born lover of nature".  He told his grandchildren how when he was walking to school, he would stop and admire the flowers and insects on the way, which often delayed his punctual arrival!

He qualified as a doctor in 1946 and married my sister Sheila in 1948. He couldn't be persuaded to specialize. He opted instead to settle in the small country town of Middelburg, 100 miles east of Johannesburg, where he practiced for 54 years, becoming   a beloved, well-known, highly skilled and respected family doctor - "nothing short of a legend" -  as he was described after his passing by the local newspaper, the Middelburg Observer, 10 years after his retirement and departure from Middelburg.

During his long sojourn in Middelburg, situated an hour and a half's drive from the well-known game reserve, the Kruger National Park, which he visited as often as possible, Max became an avid and very knowledgeable bird watcher and lover of the bush with an exceptional knowledge also of wild-life flora, insects and butterflies. But it was his beloved Dr. Austin Roberts Book of South African Birds and his binoculars that were permanently at his side wherever he drove. In fact, Max's last request to his children was to procure for him in South Africa the latest edition of Roberts, which request was acceded to, and this very weighty tome was brought to him by a family member travelling from South Africa.

After retiring and spending a short while in Johannesburg, Max and Sheila came on aliyah 10 years ago to join their large family of children, grandchildren and great-grandchildren. They settled in Jerusalem, near to the Bird Observatory which they soon discovered and, being within walking distance, spent many happy and enthusiastic hours there.

After Max passed away two years ago his family decided that they wanted to donate something to the Bird Observatory in his memory. They consulted with Alen Kacal, the director, who hails from Trinidad. She came up with the idea of a self-guided trail - a project which would enable visitors to access information at all times as the Observatory is open 24/7 but staff members are not on duty 24/7. 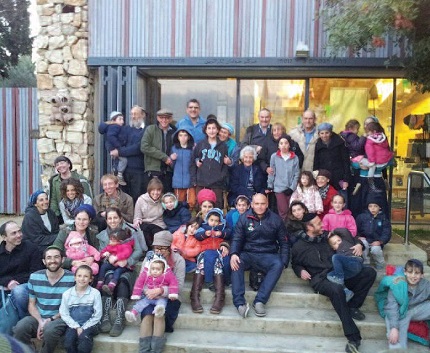 The Max Patz family dynasty outside the bird observatory

The project was a year in the planning and eventually the Max Patz Trail was officially opened on February 5, 2016. The event was very well attended by family and friends.

In her opening remarks, Alen, followed by Amir Balaban, founder of the JBO, paid tribute to Max for his interest in and love of the place. She spoke of how impressed he was by the number of young people visiting, how he loved the people he met there and how he, in turn, endeared himself to everyone. She described how, in the difficult days in the latter period of his life, his visits became fewer, but on the occasions when with assistance he was able to visit, it brightened up his day and he became a different person.

In all the years that Max visited the Observatory, his greatest interest was of the ringing of the birds, which process was explained to me at a later date. Once temporarily "entrapped" the birds are weighed and measured and are then ringed with an identification number to be included in an international database to enable the birds to be followed along their flight paths.

Fascinated as he was with the process of ringing, he himself never participated in it. A birding friend from Middelburg wrote in a condolence letter to the family ".... a bird in the hand gives a whole new dimension to bird watching". Had he done so, he would no doubt have subscribed to the proverbial "bird in the hand" being "worth two in the bush".

A background history of his father Max was given by his son David, who raised a laugh when he told of the occasion that, as a passenger in the car driven by his father, his father had stopped the car and viewed for 30 minutes through his binoculars, a bird he spotted at the top of a tree, whilst he, David, was “platzing”, bored and impatient, in the back seat of the car!

Next on the program, Alen gave the visitors an explanation of and instructions for the workings of the Apps. There are at present four stations with more planned for the future. Each station will direct you to the next one with another activity. She assured everyone that help would be at hand for anyone in difficulty.

Instruction number 1: "Take out and switch on your smart phone".

Not being the owner of a smart phone, I “switched off” so that subsequent instructions like Downloading a QR code for those who didn't have one and scanning a bar code were all beyond my comprehension!

My sister Sheila was then called upon to cut the ribbon surrounding the tree trunk to which an App was attached, and she officially opened the Max Patz Trail at the Jerusalem Bird Observatory amidst a great ovation. Everyone excitedly set about acquainting themselves with the procedure to enable them to follow the four stations. The buzz of excitement and enthusiasm was palpable and was for me a “technological mind-blowing” experience!

The Max Patz Trail has added a new dimension to the Jerusalem Bird Observatory, the place which became the love of Max’s life in Israel; a place of great interest which it is highly recommended to all  to visit and  where it is now possible  to be kept updated with all the information available  there.

You can view a video of the opening of the Max Patz Trail at the Jerusalem Bird Observatory https://www.youtube.com/watch?v=SFs9CLe_lL0.