One hundred years ago, a man named Semei Kakungulu translated the Bible into his native language in Uganda. While doing so he became enchanted with Judaism and decided to practice Judaism instead of Christianity. He named his descendants Jewish names.  This carried on for several generations, and his offspring learned more about Jewish practice from the West.  Gershom Sizumo, a fourth generation “Jew” went to study for the Rabbinate in Los Angeles and officially converted to Judaism. His teachers, rabbis, and some mohels went to Uganda to install him officially as a rabbi, and converted hundreds of people in 2008. To see more, google “Abayudaya”.

I wrote to Rabbi Gershom and received a warm reply. I offered to bring my daughter to volunteer for ten days. He gave us each a special brief - to empower women and girls, but I had no idea about the status of women there. He gave my daughter the brief to teach film. We fundraised and brought with us religious objects and camera equipment. Shira, a film editor aged 31, added the objective to make an original film of life among the Abayudaya.

After having spent ten days with the Abayudaya Jews of Uganda, I have a new perspective.  I have never experienced such delightful Jewish inspiration. Their Sabbaths, their kashrut, the education and thirst for knowledge are simply…. beautiful.

There is a school attached to the village where I stayed, run by the Jewish community. People of all religions study there. The classrooms are abysmal, broken windows, not enough desks, less than sanitary conditions, dividers between classrooms which do not keep out the sound.  We saw the paltry kitchen hut where food is prepared for the entire school of 520 students (270 girls and 250 boys) of all religions but run by the Jewish community. The students walk to school from great distances on an empty stomach and receive one meal a day. Sometimes there is nothing to eat at home. The girls told me that their biggest problem is that they have no sanitary pads, and menstruation seems to be a big cultural issue. The boys often tease them. So they stay home if, during their time of the month, there are no washing facilities or privacy, so they cannot use cloth or rags as their grandmothers did. Modern Western solutions wouldn't work there because of hygiene and cost. 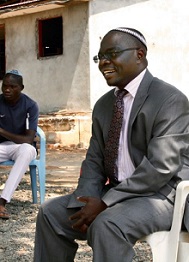 My work there developed as follows:  I went to the school to listen to the high school girls and to give them clear messages - your bodies belong to you, your education is more important than any parental pressure or money or “playing sex”.  Education is power, if you stick with it, you have a chance to earn money and therefore work, to be in an equal relationship with a partner, to have a meaningful life. Avoid pregnancy and AIDS by abstaining.

Every afternoon I went to a different village to have a women's circle where they could ask me anything. I taught them “how to pray” the Shema, we are all one, equal and one with God. They had a chance to ask questions, some very good questions: “Can we pray for money?”, “Why are there no miracles today?” I suggested that rather than expecting God to provide corn (money), that we have to be a partner to God and plant and tend the corn, then it is fine to pray for sustenance. They have beautiful tunes, I especially loved their “Mi Kamocha.”

A woman passed away of old age while I was there. The Rabbi, Gershom Sizomu, is a member of Parliament and was away.  So they approached me to lead the funeral. Muslims, Christians and Jews attended, everyone from the entire area. The other religions were blown away by having a woman clergy. I participated in the tahara and read Psalms as the local women washed and wrapped the body. It was amazing for me, with a feeling of awe, to be part of something so holy, so Jewish, and yet so African. They buried her in her backyard after digging her grave. 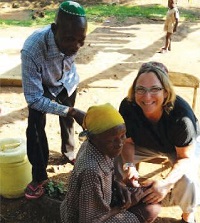 Visiting the elderly with Aaron the shochat

I visited the sick and the elderly, which was very different than the pastoral care work which I had done in Israel. They are old, alone and destitute. The most touching case was Hannah who is 80, childless and alone and was taken in by the local shochat, head of the Hevra Kaddisha and is in charge of visiting the sick. He is a subsistence farmer.  He doesn't make any money for any of his holy work, but he has taken her into his own household with his wife and many many young children.  I gave each person a blessing, a hug and some money. In Hannah's case I asked her to give me a blessing. I said that I would be her daughter so we would each give the other a blessing. 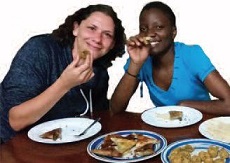 The second time I visited the girls at the school they asked me if I had solved their sanitary pad problem yet. I was so humbled, I went to town and bought $200 worth of pads, enough for 100 girls for two months or 200 girls for one month.

I also donated a youth Shabbat in memory of my dear friend, Susie Dvoskin, who had just died, whereby youth from all the Jewish communities came to study, pray and eat together. It was moving to see how the youth prepared for the Shabbat, cut the firewood, cut the vegetables, soaked the beans and rice. They received fresh lamb which was shochated on Friday afternoon (there is no refrigeration.) The local synagogue filled up with 200 youth.

Suggested solutions to support their isolation and poverty:

1. A fantastic woman of the Abayudaya named Norah is the chairperson of women of all six villages. She is also the matron of the school. She is a single mother of three girls, Emunah (12), Ilana (9) and Eitana (3). She is not paid for any of her work.  She is hungry for food. Yet, she does holy work every day all day. Since Norah has been matron of the school, there have been no teenage pregnancies. She is educated and strong, beautiful and kind, and never once asked me for money. Her quiet wisdom and dignity are impressive. I think the most meaningful money spent could be to get her a salary, $300 a month. That's it - $3600 a year.

2. Shira's film, when made, will feature Norah among others. Her plight, her strength, her amazing unpaid work, and the fact that she is a single head of household with no income. Shira's film is a vital tool to give visuals to this story. She filmed at the school and at two villages, also the funeral and vibrant Jewish life around the synagogue, both on Shabbat and on Thursday am minyan. To pay for the editing of this film (which can give total credit to the donor(s)) would be $4,000. Shira is 31 years old, Israeli, makes her own way in the world.

5. A young woman aged 19 named Binah wishes to make aliyah to Raanana. She wants to go to the army, learn Hebrew, get an education.  She will need help along the way. Here are her words, “My aim of making aliyah is I want a lot of things to happen - I want to serve in the army, study Hebrew and also Talmud, and one day I want to be a rabbi cause I admire the rabbis (leaders) who stand in millions of people looking at them teaching them. I also want to study hard be a rabbi cause some people think we women are nothing not knowing we are blessings and angels of this beautiful world”.

If you would like to contribute, please email me at judithedelmangreen14@gmail.com and I will send you details about how to send money directly.