This November it will be 80 years since the Nazi pogrom known as Kristallnacht - the night of the broken glass – which left at least 91 Jews murdered, 30,000 Jewish men arrested, and more than 1,000 shuls and 7,000 Jewish-owned businesses destroyed.  It was a terrifying foretaste of the horrors and darkness that lay ahead for the Jews of Europe and the pivotal event that shocked people outside of Germany into some action.  On November 15, 1938, just five days after the full horror of Kristallnacht became clear, British Jewish and Quaker leaders met Neville Chamberlain, the prime minister, and appealed to him to allow unaccompanied Jewish children into Britain. This set in motion the extraordinary rescue mission that would become known as the Kindertransport.

In June of this year, 42 cyclists gathered at Frank Meisler’s “Trains to Life, Trains to Death” Kindertransport statue outside Friedrichstrasse Station in Berlin.  Frank Meisler, the architect and sculptor who died in March 2018, was himself a “kind” and he created several Kindertransport monuments. The cyclists were about to set off on a 906-kilometer bike ride to commemorate 80 years since the Kindertransport. The ride was organized by World Jewish Relief, whose predecessor the Central British Fund was integral in arranging and funding the rescue effort that saved 10,000 children from Germany, Austria, Czechoslovakia and Poland from December 1938 to September 1, 1939, just before the outbreak of the Second World War. The route traced the journey made by the children on the trains across Germany into Holland. Like the children, the bike riders took the ferry from the Hook of Holland to Harwich and on the last day they rode to Liverpool Street Station in London, the final destination for many of the children before they went to their new homes. 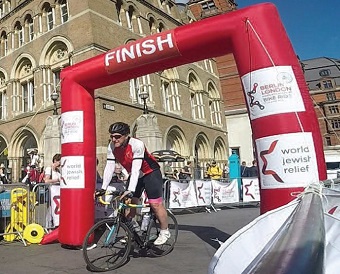 Five riders came especially from Israel: Paul Minikes-Alexander, a Kindertransport survivor, his son Nadav, his fourteen-year-old grandson Daniel, my husband Laurence Lebor, who rode in memory of my mother, and Richard Szental from Jerusalem. Paul’s wife Nili travelled in a support vehicle. I went with Laurence to Berlin a few days earlier so I could be there to see them off.

Over the following six days, the riders cycled through a mixture of sunny, rainy, cold and windy conditions. The terrain was challenging but largely flat on cycle roads and paths, apart from the uphill ride to Arnhem on the fourth day. Some of the riders had a direct connection to the Kindertransport and during the ride they described how their relatives had escaped, and how they had made a new life for themselves in Britain.

Paul was just 19 months old in July 1939, when his mother put her only child into the arms of a stranger. Because he was so young, he has no recollection of the journey. “My mother – who had already lost two babies in childbirth – made the incredibly difficult and heart-wrenching decision to put me on a train, not knowing if she would ever see me again,” he recounted when we met a few weeks after the ride, in tears as he spoke. “I don’t know how she had the strength to do it. She just knew she had to do whatever she could to save me.”

Paul was taken to a home for refugee children outside London. Miraculously, his parents both came to Britain before war broke out. His father had been taken to Buchenwald concentration camp but was released on condition he left Germany. His mother managed to escape and arrived in Britain on the day the Nazis invaded Poland. The family was reunited a few years later. Today Paul and Nili live in Raanana and they have three children and nine grandchildren.

Paul’s story shows the utter desperation felt by parents and their enormous courage in letting their children go. If he was one of the youngest “kinder”, my mother Hilde was probably the oldest. Like Paul, she came from Leipzig. She left on her own on the Kindertransport one month before her 18th birthday, leaving behind her parents and baby brother, all of whom perished in Auschwitz. She was old enough to have very clear memories of saying goodbye to her family and the journey to Britain, but the trauma and heartbreak she suffered prevented her from speaking about it before she died in 1996. Like Paul, my mother was happily married; she cherished her children and grandchildren, and she was grateful every single day of her life that she had been saved. But still, both stories illustrate the complexity of the Kindertransport experience and the lifelong shadow it cast, even when ostensibly there was a “happy ending”.

The arrival at Frank Meisler’s Kindertransport statue at the Hook of Holland on the fifth day of the ride felt momentous for all the cyclists. At the dockside, Paul said he felt a release of pent up emotions. “When I saw the statue, I was completely overcome and collapsed into the arms of my son and grandson.”

Laurence told me he thought about my mother particularly at that time. “I realized that this was the place where perhaps she felt a sense of relief that she really was escaping from the Nazis.”

The final day’s ride went through the Essex countryside and on through East London. The riders regrouped and rode into Liverpool Street Station, where there was a big welcome from family and friends, and a medal ceremony next to Frank Meisler’s “The Arrival” statue, commissioned by World Jewish Relief and the Association of Jewish Refugees. 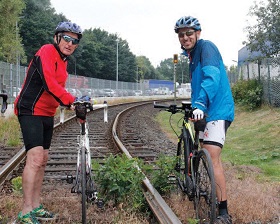 Left: Making tracks . . . Paul Alexander and his son, Nadav, on the bike ride

It was extremely poignant for my sister and me when we saw Laurence arriving at the station and cycling to the finish of the ride. My family is so proud of him. He describes the ride as a wonderful and meaningful life experience. “It was brilliantly planned and organized. I met fantastic people and heard their moving stories. I rode my bike further than ever before and it was a very appropriate way to commemorate the momentous journey made by the brave children of the Kindertransport.”

A few days later, just after Paul had returned to Israel, he participated in another amazing event: he met Prince William at Yad Vashem.

“I have to pinch myself that it all really happened,” he said. “Prince William met me and another “kind”, Henry Foner, who is older than me and was able to describe the journey to Britain. I told Prince William my story and I told him about the bike ride that commemorated the Kindertransport journey from darkness to light, which was as I saw it a gesture of thanks to the British people who opened their doors to the child refugees. He was very interested and he was impressed that we had cycled more than 600 miles.”

The riders’ incredible efforts raised more than $250,000 for WJR, which today provides humanitarian relief around the world.  Paul is proud of that achievement, and his personal one. “The ride was a stunning idea. There were times when I didn’t think I could do it, but I was encouraged all the time by my son Nadav and my grandson Daniel. I see it as a kind of vindication that has given expression to my feeling of victory. I made it to freedom and safety; I survived. I was given the opportunity for a new life, and I am forever thankful that I have had a good life.”

Clive Agran
2018-09-09
A poignant account of a remarkable achievement to mark an extraordinary episode in Jewish history.

Happy times of Shirley at Jockey Club
Bridesmaid recalls a very special day 59 years ago
Do you need a new-style senior citizen card?

Marian Lebor came to live in Israel from London in 1994 with her husband and their three children. She has a degree in History from Queen Mary College, University of London, and is a freelance writ...
More...