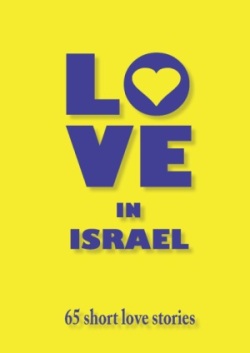 Available from Steimatsky and Amazon.

In the last 10 years short stories have steadily regained popularity. During this period, Ang-Lit. Press and its editor-in-chief, Shelley Goldman, have brought out four books of short stories. The latest was launched on January 4, 2013.

Love in Israel has a love story for each of Israel’s 65 years. Although every story is different, many have common themes: a clash of cultures (Israeli/foreign, Ashkenazi/Sephardi, Orthodox/ultra-Orthodox, Jewish/Muslim); a harking back to the earlier years of the state; the angst of young love; divorce; the perils of Internet dating; gay love.

Some of the writers are better known as poets, and a few have won awards for their writing, here and abroad. As many of the writers appear in ESRA MAGAZINE on a regular basis, we frequently meet old friends.

Almost half the stories are narrated in the first person. This gives immediacy, but can be tricky. Writers should clearly separate themselves from the narrator, or the stories tend to become reportage rather than fiction.

Avoiding this trap is Lisa Okon with The Sound of Her Voice, in a racy, with-it style, though I’m not sure that the older men in the story would talk in that way. Hannah Brown’s A Hard Day’s Life presents a wise and humane portrait of a separated couple and their children. The Ukrainian Bride, by Larry Lefkowitz, has a lively humor. Patricia Rowe gives us a graceful monologue from the grave in Waiting. Judith Colp Rubin’s The Man Who Loved History handles the relationship between an old and a young man with great insight. Enjoy Patricia Carmel’s light-hearted He’ll Be Seven and Muriel K. Moulton’s more serious Exploring Deserts.

Moving to third-person narratives, The Tailor and the Spy by Wendy Don Blumfield reads well, and Laura Seton’s Beginnings is great fun. Another well-written story is Karen Alkalay-Gut’s The Old Story, with a Jewish lecturer and an Arab-Israeli student. Everyone can relate to Shelley Goldman’s All Talked Out (lovely title), with a widower looking for a replacement wife.

Joanna Yehiel’s short and sweet Suspended, about an encounter on a train, is treated with sophistication. Julia Kruger’s Woman at the Window is a well-observed (in a double sense) love affair. Tova Gordon’s Not Another Blind Date has a good surprise ending. Happy, by Haviva Shinkar, illustrates the difficulties of online dating, and her Missing in Action is excellent suspense.

Two stories dealing with less discussed aspects of love are Help by Jerome Mandel and Because I Love You by Julia Kruger. Mandel again challenges us, as he did in the previous anthology, with a time shift to illustrate an often unexpressed problem. Kruger goes for the jugular.

The clear layout and slightly larger than usual print ensure an easy read. We can sympathize with the young, the middle-aged and the older lovers. We remember childhood loves, and the love of a place or an object. Stories by both men and women make the book appealing to everyone. We are fortunate that Shelley Goldman and her team at Ang-Lit. Press have once again given us the opportunity to read, in English, recently written stories set in Israel.

Full disclosure: Two stories (not mentioned above) are by the reviewer.

shelley goldman
2013-02-21
Thanks for a really insightful review.... you have managed to capture what this anthology and Ang-Lit.Press is all about! The print version is available from steimatzky and amazon.com .... and the e-book from kindle and Barnes

R.M. Kiel was born and grew up in Johannesburg, South Africa. She qualified as a high school teacher. She studied at the University of Witwatersrand in Johannesburg from where she has two&nbsp...
More...