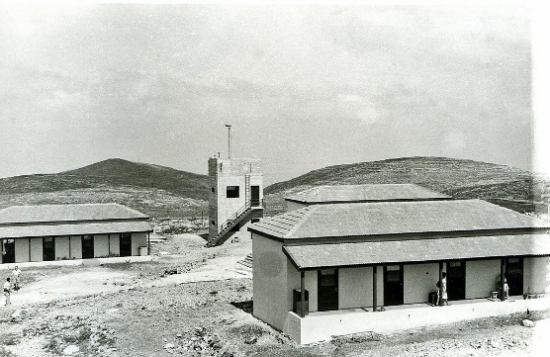 The second kibbutz to be established in the Jerusalem hills was Ma'ale Hachamisha, in 1938, just months after the brutal murder of five of the original group settlers.

Ma'ale Hachamisha, The Ascent of the Five, was one of the many kibbutzim founded within the framework of the 'Tower and Stockade' communities initiated by the Yishuv, the Jewish leadership in Palestine, during the tense days of the British Mandate.

These days the Jerusalem Hills kibbutz is a flourishing community of 450 adults and children and boasts one of the finest kibbutz hotels, conference centers and health spas in the country.

Located in a hillside setting of extraordinary beauty, Ma'ale Hachamisha is only a twenty minute drive to Jerusalem.  However, the kibbutz lies in the heart of nature offering breathtaking views from every vantage point, of which there are many.

A thirty minute ride to Ben Gurion airport and less than an hour from Tel Aviv, the kibbutz is certainly not out on a limb but offers many an open space to stretch one's limbs in the surrounding forests and agricultural areas.

After having lived in Israel for almost four decades, I departed recently from my first visit to Ma'ale Hachimisha with a tremendous sense of discovery at both the attractiveness of the place and its rich history.

Apparently a lack of suitable agricultural soil in the mountainous region, not to mention the shortage of available water, forced the members to search for original answers to make a living in such terrain.  And original they were, creating a vegetable garden from which a seed sector was developed and later served indigenous cultivation throughout the land.  It was here that a cauliflower named after the kibbutz was developed, and later on, after mastering the use of waste water, the Ma'ale Hachamisha peach was also developed.

Not sufficient to provide for a growing community, the members hit on the idea of enticing weary Israelis for a break away from home and literally moved out of their own homes during the summer months for paying guests.

This led to the building of the kibbutz hotel on a nearby ridge in the 1940s and since then the members have been able to stay put in their own homes and not take the kibbutz philosophy of sharing to the extreme!

During the War of Independence, Ma'ale Hachamisha was subject to a siege that cut the community off from the coastal plain and for a period also from Jerusalem.  The kibbutz was attacked twice by combined infantry and tank forces of the Jordanian Legion which destroyed the kibbutz chicken houses and dairy barn, killing all the animals therein.

Women and children were evacuated to the Rhatisbonn Monastery in Jerusalem and the kibbutz became a command post and base for Palmach fighters.  Commanding officers of the Harel Brigade were actually billeted in the hotel buildings.

It was from Ma'ale Hachimisha that units set out to to do battle at the Kastel, Beit Machssir and other areas of the Jerusalem Hills.  With the end of the war and demarcation of the border between Jordan and the fledgling State of Israel, the kibbutzniks found that the border of their community had turned into a border between two different countries.

During the 1967 Six Day War, the Harel Brigade once more saw action in the area, and a mountain that had been turned into a threatening command post of the Jordanian Legionnaires was over-run and taken.

A short time after the war, Ma'ale Hachimisha member Yitzhak Nevet began to grow orchids in a kibbutz hot house. The kibbutz grower of exotic blooms distinguished himself with prizes from prestigious flower shows for many years.

An exhibition of black and white photographs depicting the history of the kibbutz runs the length of one of the walls off the large hotel lobby.

It is an amazing story, even more so when one swings around and takes in the luxurious building and furnishings of the present day hotel exposed to the black and white bare days of yore shown in the mini-exhibition of the community's history on the wall.

Driving through the forest-covered hills to Ma'ale Hachamisha is amazing in itself and for the walkers amongst us, excursions by foot in the area are pure heaven on earth and a journey into the open arms of Mother Nature herself.