Did it End Here for the Maccabees?

Senior archaeologist Amit Re’em at the site near Modiin

I remember, in the early days of getting to know the Modiin area (late 1990s), that the sign on the 443 road to ‘The Graves of the Maccabees', directed the traveler to graves of the late Roman or Byzantine age.

They were not the type of burial done by the Hasmoneans, being dug out of bedrock into the ground and were covered with a stone slab.

This was considered an amusing mistake once we were shown where the actual mausoleum of the Hasmonean fighters was said to be located, and we learned about their style of burial. I have been there many times since, and never dreamed that one day I would see the site excavated. 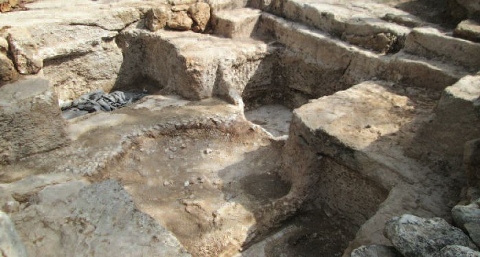 Archaeologists from the Israel Antiquities Authority had been working on the site for several weeks, when they announced that for two days during Succot, the site would be opened to the public before it would be covered over.

I was fortunate to be able to arrange for the archaeologist in charge, Amit Re’em, to guide a group and explain the full picture, and as we approached this formerly grassed over site, what a sight we saw before us. A blast from the past! 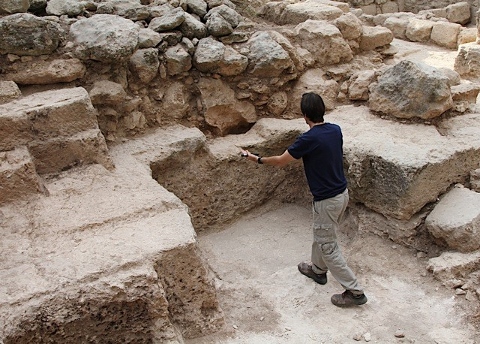 Expert Amit Re’em explaining one of the niches

Carved stone, huge stone building blocks they may be, but if you can read the stones, you come to understand where a column once stood on a stone base, the doorway, the steps, the room, the burial niche, and so on.

He agreed that the closest known to this design is the Tomb of Absalom in the Kidron Valley.

The sources tell us that it was visible from the sea, that pilgrims from foreign countries would arrive at Jaffa and see the mausoleum nestling in the foothills way ahead on the way to Jerusalem. (I can vouch for that – I have seen Modiin from the tel at Jaffa).

We could see three burial niches at ground level, with access to them, and current thinking is that three more may have been built into the upper storey. Each niche has a mosaic floor, one with a cross integrated into the mosaic, possibly Byzantine work added to the site many years after the mausoleum was built. 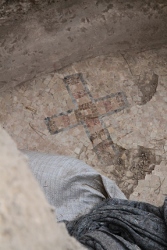 The cross in the mosaic floor

The Christian aspect is important to understand. The Maccabees not only saved Judaism from annihilation, but also saved monotheism. Therefore they became heroes, saints, martyrs, to Christians who revered them, and who often built a church close to a site associated with them. So this explains the cross in a mosaic floor on site.

There is no absolute archaeological evidence that testifies to this being the mausoleum built by Simon, the last remaining of the Hasmonean brothers, who gathered the remains of his mother, father and four brothers into one family tomb. The tomb was later looted and there is no sign of stone coffins or even human remains in the niches.

Only one column was found, and seemingly no evidence of the pyramid style roof. Nevertheless, that this is a unique construction, certainly for its time. 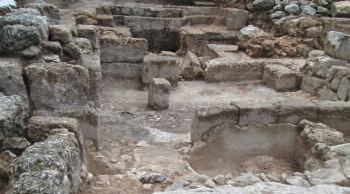 A general view towards the mausoleum

There is another section of the site to be investigated, whenever funding becomes available, that may add to present knowledge.

While the Holy Temple in Jerusalem had been made impure by the Greeks, Jews were not able to fulfill the customary three times a year pilgrimages, to enter their Temple, to make their sacrifices and to celebrate the festivals. For example, it became impossible to celebrate Succot at that time.

When the Temple was cleaned and once again made fit for Jewish ritual, the rededication ceremony of the Temple took place. Succot was also celebrated at the same time, and much jubilation and joy must have been felt by everyone, being back in the purified Temple on 25th Kislev, waving the lulav and etrog, to be chanting Hallel; as the Talmud says that it was recited by the Levites in the Temple, and by the Jews on their three pilgrim festivals. Hallel is recited in modern times both during Succot and Chanukah with the words:

“This is the day which the Lord has made. Let us be glad and rejoice in it”.

This is exactly how I felt on Succot 2015, almost 2,200 years after the event here, as maybe a part of the glory of the brave Maccabees was back in our lives, albeit for a very short time. It will be covered over as a means of preservation.