Game on! Mavens battle it out at MahJ-a-Thon

On May 12, the Modiin MahJ Mavens hosted their second annual MahJ-a-Thon. The group was established 18 months ago when ESRA sponsored free Mah Jongg lessons. Eight women, all Modiin residents, learned Mah Jongg together and quickly became enamored with the excitement of the game. Since that time, the group has been through some changes but remains faithful to Wednesday night games. We can count on 4-6 players each week.

Wanting to share their love of the game, the Modiin MahJ Mavens sponsored the second annual tournament under the auspices of ESRA. The MahJ-a-Thon attracted players from Modiin who played, just like last year, three rounds of Mahj, three hands each round. Most hands had winners; there were not many “wall games” in which no one scores. Scores were tallied and the proud winners were Rita Katz, Helen Brandwein, and Sue Haussdorf. These lucky winners won beautiful gifts handmade by Ethiopian women. 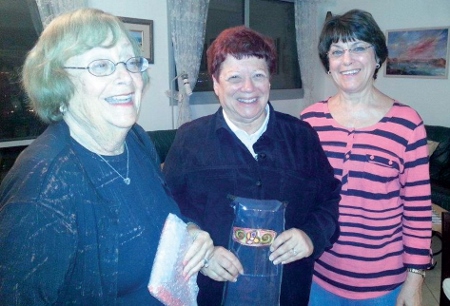 The biggest prize of all, however, was the joy of sharing the love of this ancient Chinese game with friends from our city; we are all the same in that way, yet differ in skill levels and walks of life.

The Modiin MahJ Mavens plan to continue to sponsor unique programming and are looking forward to next year’s event. Don’t miss next year’s Third Annual Monday in May Modiin Mah Jongg Marathon - it will be “MMMM….Good!”