Nothing could have prepared me for the sight of over 40 boats with full sails gliding upon the Mediterranean Sea in unison.  We were sent off with music, flags flying, lots of fanfare and much hope.  We were participating in the 3rd annual Red Med Rally, an international sailing rally that celebrates and promotes good will in the Middle East.  For the third year in a row boats from many countries were coming together to sail from Turkey down to Egypt, through the Suez Canal to Africa and back.  The rally is planned for three weeks and officially starts right before Independence Day in Israel.  A "pre-rally" feeder leg was held on April 4 in Marmaris, Turkey where all of the international boats gathered to sail together to Israel.  There were boats and participants from England, Sweden, Australia, New Zealand, United States, Holland, Germany, France and Belgium.

A special addition to the rally is the Independence Day Yacht Parade where a parade fleet of around 200 boats together with the Israeli Navy sail from the Herzliya Marina to Jaffa and back.

Since our boat is docked in Annapolis, MD, we chartered a local GibSea 43 from the Ben-Gal hostel, a nonprofit organization that teaches young troubled kids life skills through sailing.  Benny Versano was the skipper who came with the boat, and he told us about the great work Ben-Gal does with these kids.

The sail to our first stop was to take between 21-24 hours, and we planned to arrive early Saturday morning.  The winds were north west and light, 5-10 knots, not great but good enough to start with both sails up.  Around two hours into the sail, with winds dropping to 5 knots, we had to turn on the engines.  The sun was high but the air was cool and the trip was glorious.  Sailing in Israeli waters always provides challenges.  Either you need to watch out for areas that are designated as military in which you are not allowed sail or gas platforms that need to be passed with lots of space around them.  We sailed quietly through the night, and were rewarded with a wonderful sunset.  By 9 a.m. we were at Port Said, right at the mouth of the Suez Canal.  From the boat you could see the bunkers that were used to fortify the opening of the Suez Canal.

We pulled into a special area designated strictly for the rally.  One after the other the boats lined up docking Mediterranean style, stern to shore.  We attached our thin gang plank and connected with the shore.  Flags from all countries flew from the tops of the masts and down the sides of the boats.  All had the mandatory "MedRed Rally" burgess flying.  The Egyptians, renowned for their bureaucratic hassles involving customs and immigrations, held us up for a number of hours but eventually we completed the process and were allowed to leave our boats and meet some of our fellow sailors.

That evening we were invited to a neighboring hotel and dinner feast.  The entertainment was a local Egyptian band and we all danced to the sounds of the Middle East with lots of ululating and hip moving.  For those familiar with the local sounds it really sounds like a bunch of banshees all yelping at the same time.  We swayed and swooned intensively, moving our hips and tongues to the sounds of music.  The following morning we woke up early and traveled to Cairo by bus.  Security in Egypt was very tight, at one point we realized that the police had actually closed the main road to Cairo for us, and we had an armed police escort both in the front and the back of our bus convoy!

In Cairo we were treated to the national museum.  Here we spent two fantastic hours exploring the remnants of Tutankhamen and other well-known pharaohs and their mummies.  Personally, I found it amazing that after thousands of years the gold necklaces, clothing and personal items are all preserved with the body.  According to the scientist and archeologist the mummification process took around 70 days.  In that time all of the bodily liquids were extracted and various salts and preservatives were used to keep the body whole.  It was then wrapped in fine linens and sheets by special men and women and, ready for the afterlife, placed into its coffins and laid to rest in its tomb.  This was all done along with the deceased person's belongings.  There were boxes of the mummies that were found in the tombs and explanations on how everything was preserved.  The amount of worldly goods found was dependent on the wealth and status of the deceased.  The rich obviously had more goods and stones buried with their bodies than the middle class or poor. We saw more gold, rubies and jewels than in the museums in Buckingham Palace, almost no security guards and hundreds of visitors.  I could have spent another four hours there but we were on a tight schedule.  Next stop the river Nile and then off to the Pyramids in Giza.  Unfortunately, we only visited a few Pyramids and the Sphinx (or what is left of it) but we did get to go into one of the Pyramids and that was an exciting climb into the body of the tomb.  I was surprised to see how the Pyramids were built, thinking they would be a smooth body of marble or stone, but actually they were like stepping stones one built after the other.  We visited two of the boats that were buried with the pharaohs.  The pharaohs believed that when someone dies you bury with them everything they will need in the after life, all of their worldly possessions, including their carriages, boats, cooking utensils, tools, jewels and other personal items.  The whole experience was really wonderful.

That evening we returned from Cairo and prepared for our trip back home.  Half of the boats were continuing down the Suez Canal and half were returning to Israel.  The next day was probably the most meaningful experience of the trip.  While motor sailing through the  Suez Canal, with the Sinai desert on the north side and Egypt  on the south side, some of the sailors recounted their war experiences from the war of Attrition, 1971-1972, and the Yom Kippur War of 1973. Shabtai Levy, a former commandant of the Israeli Red Sea command and the skipper of Linda, lead the stories about the last time he was in the Suez.  One of the boats had two soldiers that had been taken prisoner after the fall of the Dock Bunker in the beginning of the 1973 war. 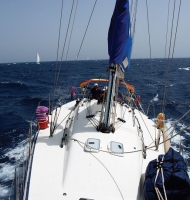 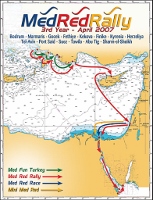 They had been taken to Egypt and had spent months as POWs.  During this trip they were completing a circle in their lives.  We heard how during the early hours of the 1973 war the Israeli forces on the north side of the Suez Canal had been attacked and could not hold off the Egyptian forces.  We heard from soldiers – who are now in their 60s – how they were captured and how men lost friends and fellow fighters, memories from many years ago and still raw as if they occurred yesterday.  These were stories of lost battles and hopes of peace.  The two hours of stories we listened to gave us all goose bumps and made us feel proud to be Israeli.  The idea that almost 34 years later we could sail in the same waters gives us all hope that maybe someday we will be able to sail from  the Suez up to Lebanon and beyond, that the waters around Israel will someday be peaceful and open to all countries and nationalities and that the eastern Mediterranean will become what the Northern Med is known for, the new Riviera and sailing ground for  races and rallies.

Unfortunately for us we couldn't continue down the Suez Canal so we returned to the Herzliya Marina together with around 20 other boats.  This was a sail for peace.  Next year, if we have the time, we would love to complete the whole sail from Israel to Africa and back.  We can only pray that peace will endure in the area and these types of events continue to prosper and grow every year.

Hildy considers herself the "wandering Jew" having lived in Israel and abroad for most of her adult life. Israel has and will always be home, but her adventures around the world have kept li...
More...